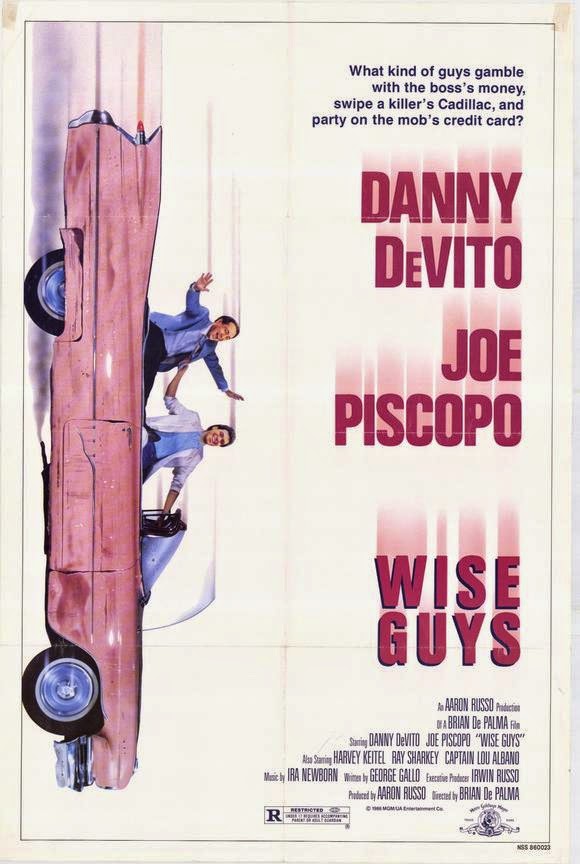 Holy cannoli, it’s Burl, here to review a mobster picture made in the mid-80s by none other than Brian DePalma! This is a movie I’d never seen before, but of course I’d always been curious about it, because), ha ha, it’s a DePalma picture, and I’m compelled to see each and every one of those!
It’s a comedy too, which seemed to confuse people at the time of its release! It confused me too, but I soon realized DePalma was an old hand at comedy! He made a bunch of them at the beginning of his career, after all, including the great Phantom of the Paradise, and you could say with some justification that many of the more outré sequences in his later suspense films, particularly in such works as Body Double, Raising Cane, Snake Eyes, Femme Fatale and Passion, deliberately edge into the chucklesphere!
Danny DeVito from Ruthless People and Junior and, of course, The Van, plays Harry, who would be the very lowest man in the Newark crime organization he works for if not for the presence of his neighbor, co-worker and best friend Moe, played by Joe Piscopo from Dead Heat! Their organization is godfathered by Dan “Commando” Hedaya, and his brutal enforcer is none other than famed NRBQ manager and song subject Captain Lou Albano!
Well, in a series of boneheaded moves as quick as they are inevitable, Harry and Moe find themselves in deadly dutch with Hedaya’s gang! The boys hudzel down to Atlantic City in Captain Lou’s pink Caddy, looking for protection from Harry’s mob retiree uncle! The uncle is stone dead however, so they must turn to hotelier Harvey Keitel, whom we know from Mean Streets and The Grand Budapest Hotel! But is Harvey friend or foe? Only an unlikely but still satisfying climactic doubletwist will reveal the truth!
DePalma was on a bit of a gangster kick at this time in his career – he’d recently made Scarface, and directly after this would make one of his biggest hits, The Untouchables! Carlito’s Way wasn’t that far down the line either! But very little of the style he put into all those other films is present here! There are a couple of tricky-tricky camera tricks, sure, but I was disappointed that this wasn’t what I’d hoped for: A classic 80s comedy gene-spliced with a classic 80s DePalma movie! A reasonable hope, I think!
But I still enjoyed the picture! DePalma rounded up a top-flight gangster cast: in addition to the names already mentioned, there are appearances by such stalwart gangster mugs as Ray Sharkey, Frank Vincent and Tony Mufano! And though it’s not often funny in the traditional sense, I found it a pretty funny movie much of the time! Captain Lou in particular delivers the goods! DeVito and Piscopo bring everything they learned from their earlier gangster comedy Johnny Dangerously, and I’m pleased to report that Piscopo was not as irritating a presence as I’d expected him to be! His character actually has a sort of arc!
In short, Wise Guys is worth a look, but it’s no lost classic! It’s an oddball entry in the DePalma filmography, and feels exactly like a little palate-cleanser shoehorned in between bigger projects, kind of like After Hours was for Scorsese! I’m going to give Wise Guys two and a half pairs of the strangest pillow cases ever seen!
Posted by Burl at 15:22