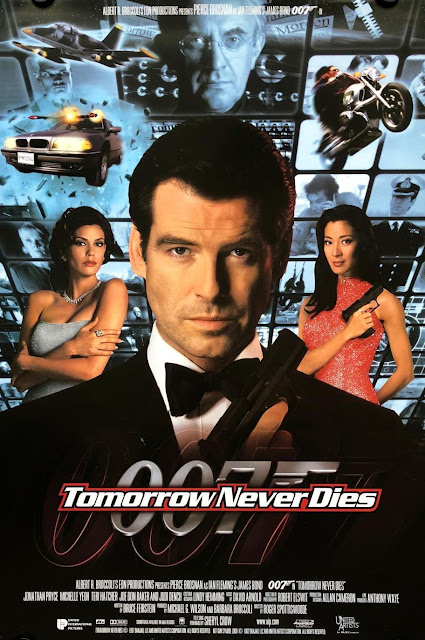 Hi there, it’s Burl, shaken but not stirred! Yes, I thought I might give you a little review of yet another James Bond picture, this one featuring not Sean Connery from You Only Live Twice; not Roger Moore from Moonraker; not Timothy Dalton from The Living Daylights nor Daniel Craig from Spectre, but Pierce Brosnan, an actor we know from Dante’s Peak and The World’s End! Ha ha, the picture, his second appearance in the role, is Tomorrow Never Dies!
The plot is pretty boilerplate Bond! We’ve got a Rupert Murdoch-type media mogul played by Jonathan Pryce from Brazil, who’s got the following: a gizmo which fools ships into misapprehending their location; a stealth ship that can’t be detected by radar, sonar or other means; a big extendable drill that can bore through ship hulls and cause crazy chaos; and a number of henchmen and subcontractors, played by the likes of Ricky Jay from Boogie Nights, Götz Otto from Iron Sky, and Vincent Schiavelli from The Adventures of Buckaroo Banzai! Pryce’s plan is to use his toys to foment war between Great Britain and China, and then be on the front lines with his reportage! Ha ha!
Bond comes on the scene fairly quickly, rekindling a romance with Teri Hatcher from Tango & Cash and then teaming up with a fast-action lady played by Michelle Yeoh from Crouching Tiger, Hidden Dragon! Ha ha, Yeoh is a terrific partner to Bond in this one, and it would have been nice to have her be a repeating character! Strangely, as happened in the first Brosnan Bond, GoldenEye, an American CIA agent shows up to help out, but for some reason it isn’t Felix Leiter! No, it’s a crude-talkin’ Texan played by Joe Don Baker from Fletch! Why didn’t they still have Baker play him, but simply make him Leiter instead of “Wade?” Ha ha, who knows; and to make things even more complicated, Baker played a bad guy in The Living Daylights!
The action moves along at a fair clip - at 119 minutes, for a modern Bond picture it’s really quite slim! There are a couple of fun scenes, like the one in the parking garage with the remote control car which Bond drives from the back seat, or the motorcycle-helicopter chase, and all of this is reasonably well-handled by Roger Spottiswoode, who also brought us Terror Train, ha ha; but Pryce’s character is a weak villain (ha ha, that’s why he gets so many henchpeople, I guess!) and there are a few hints of the poor writing and extreme silliness which would infect the second and last two Brosnan efforts, The World Is Not Enough and Die Another Day!
Mostly it seems like a construction on which to hang a few quips and some observations about the media-driven, post-O.J. world we lived in back in 1997! (Ha ha, in fact, these days it feels slightly prescient!) Really, the best thing about it is that, Citizen Kane callbacks aside, it doesn’t try too hard to be anything but a simple-minded Bond picture! I give Tomorrow Never Dies two bossyboots car voices!