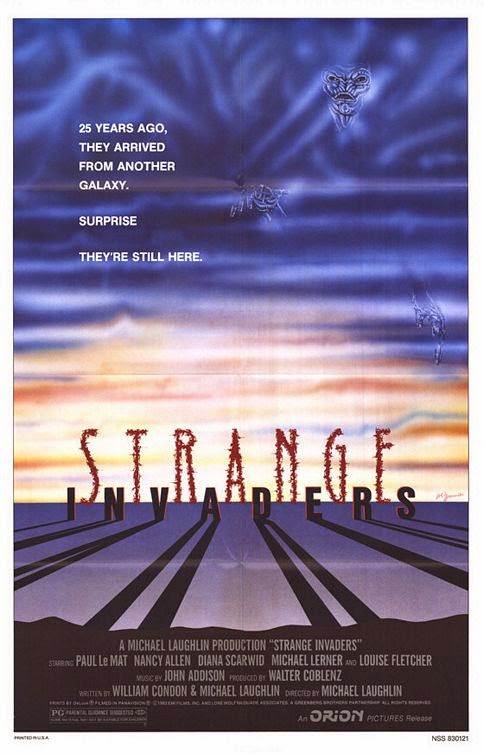 Attention earthlings! Ha ha, Burl here, with a review of another spaceman picture for you! This one is called Strange Invaders, and in my own personal taxonomy it fits in with other movies I find it difficult to believe I saw in the theater! Ha ha, I’m talking about pictures like Time Walker, Witchboard, Deadtime Stories and Sasquatch: The Legend of Bigfoot! It’s hard now to remember a time when pictures like that actually got any big-screen exposure at all, let alone in my neck of the woods, but they did, and I have to admit there’s something genuinely thrilling about the idea of (and the memory of) seeing a cheap and resolutely B picture at the cinema!
Ha ha, clearly I’m easily thrilled—but remember: I’m Burl! Anyway, Strange Invaders! Yes, this comes from the director of Strange Behavior, and I guess being the director of movies about strange things is as good a trademark as any! Behavior is probably the better of the two pictures, but this one has its charms – charms I would put into the same category as, and assign roughly the same value to, the ones in Remote Control!
We have a pretty game cast though! Paul LeMat, whom we know so well from Death Valley, plays a professor of entomology whose ex-wife disappears when she returns to her hometown of Centerville, Illinois, leaving the couple’s daughter behind! We know there’s something screwy about the town, because we were shown as much in a 1958-set prefatory sequence! LeMat and his woofing dog follow her trail, but soon Le Mat’s investigation becomes a catalogue of bizarre happenstances! Everyone in town acts weird; the woofing dog disappears and woofs up and down the street several times as an ether; his car is zapped by horizontal lightning and explodes; he sees a weird-looking man; is zapped again, blowing the doors and trunk off his stolen car! Ha ha, and I started laughing to myself most heartily at this point, imagining him telling people about his trip!
Of course it’s all about alien takeover! Le Mat takes his bewildering tale to different people, hoping they can help! But Louise Fletcher, who runs a UFO drop-in center which turns out to be a government front, can do nothing for him; and when he goes to a tabloid editor played by Nancy Allen from Robocop and Poltergeist III, he receives only mocking! But the bizarre happenings continue, and Nancy’s building superintendent, played by none other than Wallace Shawn from My Dinner With André and The Princess Bride, is zapped too, and apparently killed! Michael Lerner from Class Reunion shows up and tells the tale of woe that betided him when his family was shriveled before his eyes and transformed into glowing blue balls that fly away from him! This triumvirate return to Centerville and face off against the aliens!
You can see what I mean about the cast! Ha ha, and there’s more – we get appearances from such familiar faces as Kenneth Tobey from Innerspace and The Long Ride Home, June Lockhart from Curse of the Black Widow and Charles Lane from Twentieth Century and a few other movies besides, ha ha! It really is a marvelous group! It’s got some dodgy acting at the same time, though – both Nancy Allen and Diana “Psycho III” Scarwid, who plays the ex-wife with a secret, are pretty bad!
But the movie itself is very endearingly goofy! There are some good trick effects – the alien masks and the shriveling is all done nicely, and there’s a shot of a hovering alien craft which, in both design and execution, hits some kind of rare sweet spot; and at the same time, as with Deep Star Six, I’m astonished that I’m of an age to have witnessed something like this, with its 1950s-level model spaceships!
I found it pretty entertaining despite and also from its vast panoply of flaws! It’s crazy nonsense, but it looks nice and has that terrific cast, so why not have a look yourself? I give Strange Invaders two and a half disembodied woofs!
Posted by Burl at 21:23

Email ThisBlogThis!Share to TwitterShare to FacebookShare to Pinterest
Labels: 1980s, aliens, saw it on the big screen, sci-fi