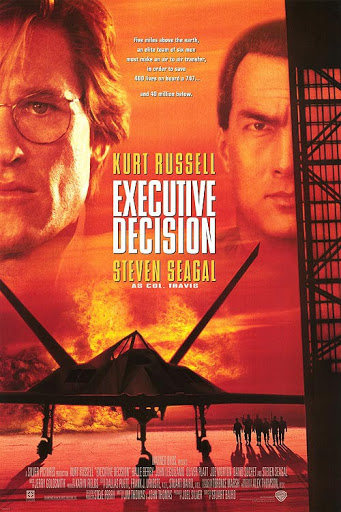 Ha ha, Burl here with a simple question for you: what would you get if you combined Die Hard with the 1970 Ross Hunter production Airport? One assumes you’d simply get Die Hard 2, or maybe something like Air Force One! But I’ll tell you what: I think you might get a picture very like Executive Decision!
“Ha ha, Executive what?” you might ask! And your question would not be a foolish one! This picture is a real product of the 1990s, but now it seems largely forgotten, though it was as slick and big-budget an action-drama as they came in those days! It was directed by Stuart Baird, a film editor with plenty of action-movie cutting experience, who managed to infuse all the pictures he directed - well, the ones I’ve seen anyway, which include this one, a semi-sequel to The Fugitive called U.S. Marshals, and the last of the Picard Star Trek features, Star Trek Nemesis - with a strange, subliminal, post-viewing suggestion that the audience immediately forget anything about the movie they’ve just seen! This Peter Reveen of the cinema made his directing debut with Executive Decision - and, ha ha, it’s okay to admit if you’ve forgotten the title since the last time I typed it!
There’s something kind of machine-tooled and generic about the movie, and I’ve always thought the utterly banal title of the picture suited it nicely! There’s a fine, high-concept premise: a gang of terrorists, led by David Suchet in brownface, takes over a 747 with the goal of delivering a deadly payload of nerve toxin, and an elite force of covert operatives slip onto the plane in mid-flight in order to foil the plan! Ha ha, this involves sneak-flying underneath the airliner and crawling through a shaky tube up to the belly and through some kind of service hatch!
Kurt Russell from The Thing plays the unwilling hero, a strategic analyst unused to the action shenanigans of the field! Once aboard he gets in touch with Halle Berry, playing a spunky stewardess in the tradition of Karen Black in Airport 1975! Meanwhile the bomb is ticking down and the U.S. officials are getting antsy, ready to send fighter planes to shoot the plane down the moment it crosses into their airspace! As befits a picture made by an editor, it does a reasonably good job of juggling two or three separate but parallel suspense sequences all happening at once!
It’s got a lot of the 1990s in it, this picture, and that’s largely thanks to the supporting cast! John Leguizamo from the even blander Collateral Damage is one of the commandos; J.T. Walsh from Misery is a grandstanding senator; Oliver Platt is the fellow who came up with the tube idea; B.D. Wong is yet another commando; and Joe Morton, an actor I’ve admired ever since I saw him in The Brother From Another Planet, and who became an unlikely action figure in movies like Terminator 2, Speed, and this, plays the bomb defusing expert who gets badly shaken about during the tube transfer and spends the rest of the picture gaff-taped to a stretcher! Ha ha, even Marla Maples is in it! And, of course, in the most 90s touch of all, we get Steven Segal, who was formerly Hard to Kill, but proves not to be so here! Ha ha!
Yes, you heard that right: they got Steven Seagal, then at the tail end of his mid-budget action stardom, to play the boss commando of the movie, then they tossed him out of a plane at 35,000 feet! Ha ha, you’re pretty grateful to see him go, since his character is pretty much just a jerkier version of any of his other characters! He flies out of the tube in a noble act of self-sacrifice, but I sure wish they’d gone with the original plan and had his head explode in a thrilling rush of depressurization! (Seagal himself put the kibosh on that, claiming that his fans wouldn’t have liked to see him go that way, but I think they would have loved it!)
Anyway, it’s not a good picture, though of course it presaged 9/11 in many respects; but it’s a modestly entertaining one, with a few thrills here and there, all the lavish slickness a studio can offer! (Alex Thomson shot the picture, mostly, but in keeping with the whole, the cinematography is merely competent, without that dark and velvety style he gave movies like The Keep, Alien 3 and even, at points, Cliffhanger!) It is instantly forgettable though, and I had to force myself to recall enough to even write this review! Ha ha! I give Executive Decision one and a half chewed straws!