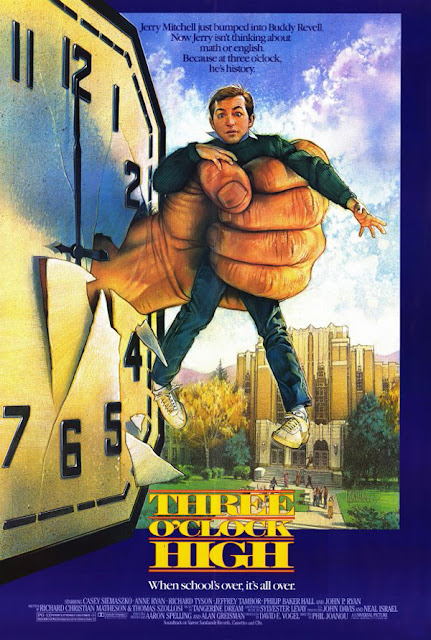 Attention students, it’s Burl, here to review a comedy of scholastic drama! Now, this picture, Three O’ Clock High, was among a group of pictures that were all clustered together in my mind! Maybe we could call it “mid-budget style,” but all these movies - Three O’ Clock High, Fandango, Vamp, a few others - have some notable commonalities, including fancy camera angles and tricks, a mildly comedic tone, and young directors who, having made their flashy feature debuts, dropped the film brat showoffery in their subsequent works! This particular movie was the grand premiere of Phil Joanou, who went on to make serious crime drama pictures like State of Grace and Heaven’s Prisoners, both of which I’ve seen, but neither of which I can remember! Ha ha!
But I can remember this one, and fondly! Of course that’s because I was in high school at the time, and very into movies, and susceptible to the sort of sub-Scorsese style with which this picture is lavished! And of course it’s also a story of fighting back against a bully, and you can’t go wrong with a story like that!
Casey Siemaszko, who was always a juvenile delinquent in such pictures as Back to the Future and Stand By Me, or a pal of the lead in things like Secret Admirer and Biloxi Blues, here plays Jerry, a middle-caste high schooler with nerdish tendencies! His thing is being on time, doing his homework and managing the school store! Ha ha, that’s his bag, man! But on this particular day his routine will be upset, for this is the day the legendary badman Buddy Revell, who is said to have twisted off heads in his previous schools, becomes a part of the student body!
Jerry quickly runs afoul of the new boy, and is challenged to an after-school punch-fight! The bulk of the picture is the increasingly panicked Jerry’s attempts to get out of the fight, or calm Buddy down, or hire a football jock to dissuade the bully, or to simply escape! But because this is another one of those weird American high schools with its own security brigade - it reminded me of Ferris Bueller’s Day Off in that way - Jerry is prevented from simply leaving by a golf cart-driving stormtrooper played by Mitch Pileggi, the electromaniac in Shocker! Ha ha!
Siemaszko does a pretty terrific job in the role of Jerry, I do so assert, and the rest of the young cast is solid too! There’s  great gallery of older faces as well: Jeffrey Tambor from No Small Affair as a passionate teacher; Philip Baker Hall from This House Possessed as an iron-nosed cop; John P. Ryan from The King of Marvin Gardens, The Right Stuff, and Avenging Force as the tough principal; Charles Macaulay from The House of Seven Corpses as the school’s Master of Discipline; Shirley Stoler from Splitz in a friendly appearance as Eva; and once again Large Marge, which is to say Alice Nunn from Holy Wednesday and The Fury, as the school nurse! Plus there’s a beauteous teacher played by Caitlin O’Heaney from Wolfen and He Knows You’re Alone!
It’s a fun little picture with the sort of simple-minded 80s concept - John Hughes riffs on High Noon! - that is just barely strong enough to hang a series of gags and stylistic hoo-haws on without it collapsing into complete nonsense! Ha ha, we learn virtually nothing about the characters, so it’s all surface and nothing else; most of the 80s teenpic cliches are present and accounted for; and one wishes for a stronger ending than the one we get! But it’s enjoyable, and is more fondly remembered than many of the more po-faced teen pictures of its time! I’m going to give Three O’ Clock High two and a half yin-yang neck brooches!