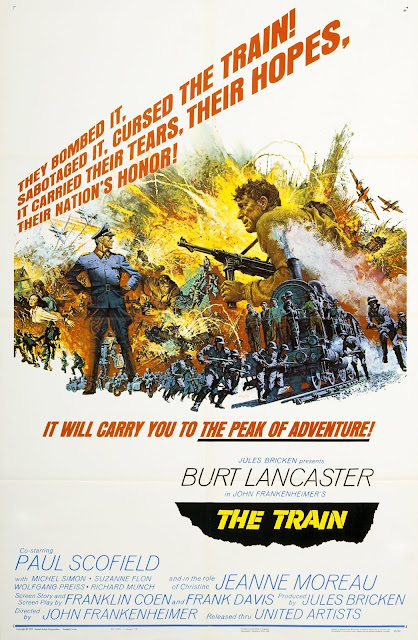 Ha ha and rolling stock, it’s Burl, here to review a fantastic movie about a train - and guess what, it’s called The Train! That’s right, it’s the wartime action drama from John Frankenheimer, who also brought us such winners as Prophecy and The Manchurian Candidate! The picture is laid in France as the Liberation approaches, and the Nazis, at the behest of a German colonel called Von Waldheim, played by the terrific performer Paul Scofield, are collecting great artworks from the Paris museums and shipping them to Berlin by puff-puff!
Burt Lancaster, whom we know so well from The Osterman Weekend and Local Hero, plays Labiche, a railway yardmaster who’s also part of the Resistance! When he’s asked to use his rail-based sabotage network to stop the art train, he initially scoffs! Ha ha, he says, a bunch of paintings aren’t worth the lives of several fellows! But others in his group feel more strongly about it, and when they start acting to slow or stop the train, Labiche has no choice but to join in and do his best to foil the Nazis! Quickly he becomes the number-one enemy to the increasingly art-obsessed Von Waldheim!
Ha ha, I became a big fan of this picture the moment I first saw it, which was actually at an art gallery as part of some kind of film series they were doing! The movie clearly respects, even cherishes, the crucial role of art in human society, but as more and more partisans are killed in the effort to save the Picassos, Cézannes, Braques, Renoirs, Mìros etc. etc. from the Nazis, the tough questions are asked: how many lives are a trainload of paintings worth? Ha ha, or, is that even a fair equation?
Of course the picture has a fantastic French cast: Jeanne Moreau is in there as a wan war widow; Suzanne Flon and Albert Rémy both make appearances, and the great Michel Simon plays the dyspeptic Papa Boule! And there are Germans too of course, most notably Wolfgang Preiss, who was always playing German officers in pictures like Von Ryan’s Express (another wartime train picture, ha ha!), and who plays another one here! He does a particularly good job of it, and is a good foil for Scofield, particularly near the end!
But the puff-puff itself might be the real star! Well, ha ha, I’d give it and Lancaster equal billing I suppose, because both turn in the most extraordinarily physical performances! Lancaster is forever sliding down ladders, leaping on and falling off moving trains, rolling down hills and leaping over gullies, often while in real life suffering from a leg injured when he stepped into a gopher hole while golfing on his day off! Meanwhile the train steams grimly ahead, slipping off sabotaged rails or charging ahead like black lighting, a scream of warning issuing from its whistle!
There’s a great train collision that has to be seen to be believed, and this was accomplished not with models or other trickery, but by simply smashing one real train into another, at speed! Ha ha, my hat is tipped to Frankenheimer, his great camera crew, and all the stunt and trick effects folk who worked so hard to make this spectacle! And we should pour one out to all the cameras that obviously got mangled while capturing, in their last moments, these titanic clashes of steam, wood and metal! Ha ha, this is a fine war picture, and I give The Train three and a half one-franc pieces!