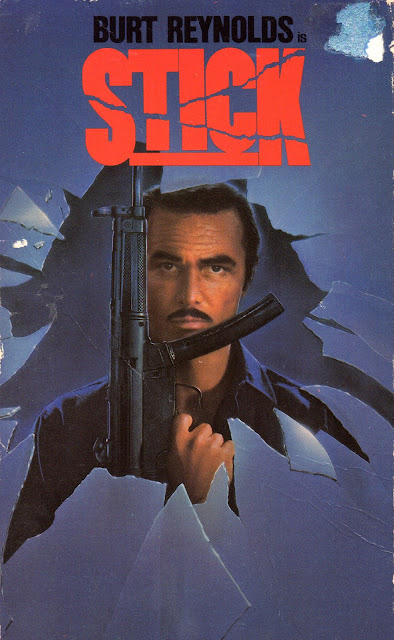 Ha ha, hi there all you pals, it’s me, Burl! Yes, I’m here to review another motion picture for you: one of the Great Burt Trilogy of 1985! Ha ha, as you probably recall, that was the era in which Burt Reynolds, as his predecessor Andy Warhol had done a decade earlier with Flesh, Trash and Heat, released three single-word-title movies, Stick, Malone and, again, Heat!
Of course I’ve already reviewed Malone for you, and today’s review is for Stick! This picture is based on an Elmore Leonard novel about an ex-con named Stick Stickley who returns to Florida and gets mixed up with a bunch of crazy criminals, while trying to stay as straight as he can and reconnect with the teenage daughter whose childhood he mostly missed due to being in the pokey! Most of this was retained for the movie, except they turned it into more of an action thriller, with some chase scenes and gunplay and so forth!
Apparently these more action-packed scenes were added in after Leonard had done his bit for the picture! It’s funny, for most of the movie you see Stick put a punching or a kicking on the bad guys, then taking away their guns and tossing the firearms away! He appeared to be one of that special brand of action hero, The Guy Who Doesn’t Like Guns! As one of those myself, I always applaud this approach! But then, for the climax of the picture, Stick finds himself a machine gun and rat-a-tat-tats many a henchman into an early grave, ha ha! And after the movie stiffed theatrically, Universal Pictures clearly wanted to emphasize the popgun action, as you can see from their video box cover!
The movie’s not such a good one, though! It’s not just the eleventh-hour tampering; pretty much the whole movie seems like something Michael Mann might have made after accidentally swallowing a bottle of barbiturates! There are a few high points, and one of them is the creepy albino henchman played by stunt maestro Dar Robinson! He’s a nasty piece of work, but actually he takes a lot more punishment in the picture than he doles out! Burt puts a pretty sound punching on him, and then, in an amazing stunt that I wish had been filmed better (though it’s still pretty good), he falls off a high-rise balcony, firing his gun all the way down! Ha ha, thud!
There’s a pretty weird cast! Charles Durning dons a clown wig to play some sort of drugs ganglord, who in the book is an entirely different sort of character! Then there’s a supposedly scarier drugs ganglord who must have been found at Central Casting, Hispanic Division! George Segal appears as The World’s Most Obnoxious Man! And then we see Candace Bergen, the boringest actress in Hollywood, as Stick’s new girlfriend!
Burt directed this one himself, and he pulls off a decidedly workmanlike job! “Workmanlike” might have been coined specifically to describe his work here, in fact! His hairline changes from shot to shot and scene to scene, and he obviously had a pretty good time instructing actresses to ogle him as though he were the greatest thing they’d ever seen! In the end, the picture is so thouroughly 1980s that it’s hard to truly dislike it, and I’m going to give Stick two angry stinging scorpions!