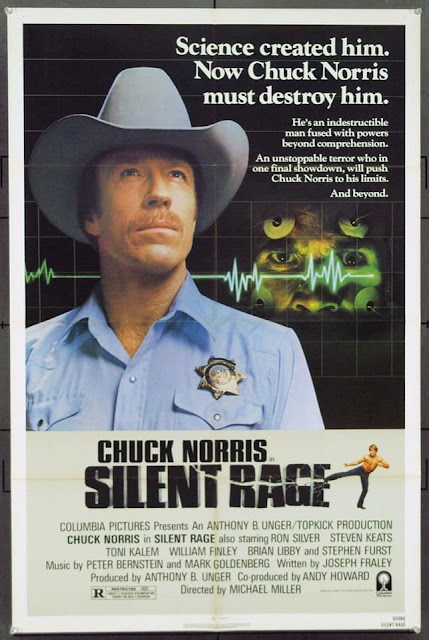 With vocal jocularity, ha ha, it’s Burl, here to give you a taste of Silent Rage! Yes, we’re talking about the Chuck Norris horror movie made by the portly director of Class Reunion! (Chuck apparently did another horror picture later on, called Hellbound, but I’ve never seen it and am not at all certain it really exists! Ha ha!)
This picture begins in a rooming house, where a mentalsman called John Kirby, played by Brian Libby from Dreamscape, sweats and mutters, then grabs an axe and gives a couple of unfortunate folks the chop! But pretty soon Sheriff Chuck Norris arrives on the scene, and there is a scuffle! The end result is the raging, flailing maniac blasted repeatedly by police revolvers! Ha ha, end of story!
But no, not so fast! The dying maniac is transported to some kind of clinic, where a trio of medicos played by Ron Silver from Timecop, Steven Keats from Black Sunday, and William Finlay from The Fury, do some Dr. Frankenstein science on him and render him invulnerable! Ha ha, just what everyone needs, good going fellows! Silver isn’t actually a part of the resuscitation - in fact he considers it unwise, while Keats acts out the monomaniacal mad scientist routine and Finlay just helps!
Pretty soon, of course, the undying maniac is loose, and on the prowl for people to kill! He settles on Silver and his wife, and there’s a good, tense scene at their appealingly bohemian house, with a great final shocker! Ha ha, this scene is perhaps the movie’s finest! Chuck, meanwhile, is having a romance with Silver’s sister and battling a biker gang; and Stephen Furst from The Unseen plays a developmentally delayed deputy whom Norris has deemed trainable! They must all go up against the terrible maniac with his self-healing flesh and superstrength muscles!
Now, as I’ve said, there are some genuinely tense and well-handled suspense scenes here; but for every one of those there are two that are muffed, bungled, or otherwise befumbled! So it’s not a classic picture, but the concept, “kung-fu sheriff vs. undead, indestructible psychopath,” is strong enough to paper over some of the stumbles! There’s an odd quality to the cinematography that I find appealing, and Chuck tries so hard to emulate human behaviour that it becomes endearing!
It’s a curio mainly, ha ha, and for that it gets some extra credit, and you can't deny it has the courage of its loopy convictions! But equally you can’t make the claim that it’s a good picture, so on balance I’m going to give Silent Rage two tragic dog stories!