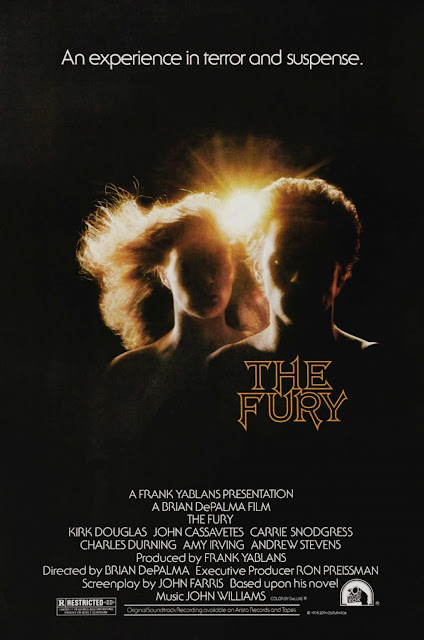 By the power of the mind, it’s Burl, here to review a Brian De Palma picture for you! Now, it’s not one of his best movies, like Blow Out, nor his most popular, like Mission: Impossible, nor his most impersonal, like Wise Guys, nor, certainly, is it among his most characteristic pictures, like Dressed to Kill or Body Double, but it’s a solid piece of Hollywood entertainment! The picture I’m palavering about is, of course, his very Carrie-like follow-up to Carrie, The Fury!
The story is a little bit bifurcated, but I think it’s safe to say our hero is Peter Sandza, a secret agent of an undetermined variety played, with his usual vigour, by the recently late Kirk Douglas, whose work we all loved in Two Weeks in Another Town and Eddie Macon’s Run! Peter has a son, Robin, played by Andrew Stevens from Massacre at Central High and 10 to Midnight, and Robin’s bad luck is that he’s extremely psychic! Next thing you know, Kirk’s colleague and supposed pal Childress, essayed in “picking up a paycheque so I can make my own movies” mode by John Cassavetes from Incubus, kidnaps Robin and tries to kill Peter! Ha ha!
Dateline Chicago, one year later! The other half of the bifurcation is the story of Gillian, pronounced with a hard G and played by Amy Irving from Crossing Delancy! Ha ha, she too is psychic of course, and doesn’t wish to be! But she soon finds herself in a special school run by Charles Durning from Stick and The Hudsucker Proxy, and staffed by, among others, Carrie Snodgress from Homework and Large Marge herself, Alice Nunn! Snodgress is secretly in love with Kirk, and is going to help him find his son, who has lately been living it up in a big house under the tender care and caresses of Fiona Lewis from Strange Invaders and Innerspace! But the tests and treatments administered by Cassavetes are unwinding him psychologically, as we see in a sequence involving an indoor funfair, two Arab princes, and an out-of-control carousel ride!
Kirk’s search for Robin mainly takes the form of an adventure-comedy picture, though horror and tragedy rear their heads throughout! Kirk’s stint with the Nuckells family is one of the comic passages, and a chase scene involving poor Dennis Franz (whom we know so well from Die Hard 2) worrying about his newly purchased car is another! But the story ends in terrible tragedy, though I won’t detail it for you! But there is a coda, probably the moment for which this picture is best known, which involves Cassavetes and Irving, a pair of blue eyes, the trick effects artistry of a young Rick Baker, and several pounds of explosives! Ha ha, it’s pretty spectacular, and it looks like they had about seven cameras rolling on it at once!
On the downside, the story is a little confused and not completely satisfying; but this is De Palma, ha ha, so whaddaya want! Worse is the sketchy character development: when Robin’s personality changes completely at the end, it doesn’t mean very much, as we are largely unaware of what his personality has changed from! Kirk’s motivation is apparent enough, but that’s about all we get - ha ha, we’re never even told the name of the agency that he and Cassavetes work for! It’s just another one of those “agencies you’ve never heard of,” as we’re told several times! And the ladies, mainly Shodgress and Irving, get even shorter shrift, though their performances are very good! Still, for all this, I enjoy the picture, with its glossy 70s studio feel and its lush John Williams score! I give The Fury two and a half episodes of M*A*S*H!