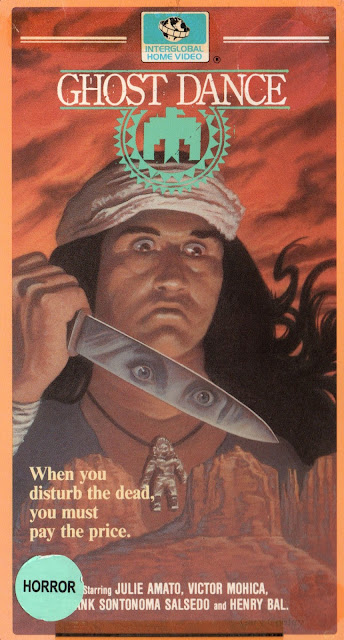 Hi, Burl here! Ha ha, it’s time to review a sort of a slasher picture, but not really! But on the other hand, sort of! It’s structured like a slasher picture for the most part, and there is a slasher, but he’s been possessed, so to some of the more dogmatic slasher taxonomers he might not count! But I say that’s splitting hairs, and by garr, this fellow splits a lot more than hairs in his quest for Indian vengeance, ha ha!
It seems that some anthropological researchers (or “reckless fools,” as the back of the video box characterizes them, though I think that would better apply to the anthropologists of Time Walker) have disinterred an ancient Aboriginal somewhere in New Mexico! Ha ha, he’s called Nahalla, and in a spectacular medicine light show, he takes over the body of a local redman and starts a-killing! There are a few Omen-style accidents as well, but most of the carnage occurs at the hands of the Nahalla-proxy!
Lead archeologist Dr. Kay Foster happens to look just like Nahalla’s wife from way back when, so he starts throwing a possession whammy her way too! Her boyfriend, who contends throughout the picture that everything is just a crazy legend, is not too thrilled about any of this business! Finally it all culminates in a nightmarish and downbeat finale!
I’ll tell you the big flaw with this movie: there’s not enough good stuff! It’s pretty talky, and frankly it could use a few more strange murders and mysterious goings-on! But I’ll tell you something else: what is there is actually pretty good! I always like a movie set in the deserts of the Southwest for starters, and on top of that much of the movie takes place in a museum, just like The Outing! But better use is made of the location, I must say! Ha ha, there’s a great chase scene where the lady thinks she’s lost Nahalla, but he rises up from behind a display, standing just in front of a condor exhibit in such a way that he looks like he’s got massive wings growing from his shoulders! Also there’s an ill-fated couple who make sweet love in a horse-and-buggy exhibit, and even though they’re not directly connected with the desecration of his grave, Nahalla makes short work of them anyway! And then the ending is, as I mentioned, actually fairly spooky, or at least it spooked me out a little bit!
Another thing worth mentioning is that, for a cheap regional horror movie, it’s got some pretty decent photography! The cinematographer was Fred Murphy, who would go on to shoot movies like Larry Cohen’s Q, the Eddie Murphy copshow Metro, and also John Huston’s final picture, The Dead! Ha ha, an odd career, but a talented guy!
Well, it’s hardly a perfect movie, and it’s only even a lost gem if you’re predisposed to liking the very specific elements that make it up and if you’re in exactly the right mood for it, but on the possibility that those criteria may be met one evening, I’d recommend giving it a try! Surely to biscuits someone somewhere has made their VHS copy available for viewing to just plain folks! Ha ha, I give The Ghost Dance two and a half falling shards of glass!
Posted by Burl at 21:27