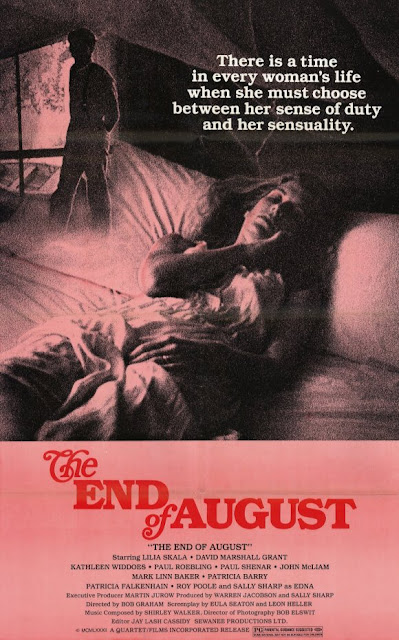 Ha ha, Burl here at summer’s end, presenting to you a review of a fairly obscure period self-actualization tale! The End of August is set in New Orleans in, ha ha, and I’m guessing here, the very last bit of the nineteenth century! It’s hard to tell, because every character seems to be from a slightly different time period, and it may be that this is an intentional attempt to create a strange temporal dislocation, or simply that this low-budget production had to take what it could get from the prop and costume houses!
It tells the tale of the “sensual awakening” of Edna Pontellier, a handsome rather than pretty wife and mother of position! Edna has a husband, Leonce, who looks like a riverboat gambler, and a couple of kids who gallop through the shots when it’s convenient, but are packed off to bed or to relatives in the country whenever the film wishes to concentrate on Edna’s awakening!
Leonce, despite his sinister look, is a decent if old-fashioned fellow, increasingly baffled by his wife’s twentieth-century behavior! He consults with, and gets conflicting advice from, a number of different men, but there’s nothing much he can do! Edna gets a crush on the young fellow from next door, but this entity proves flighty and fickle and self-removes himself to Mexico when the going gets semi-serious! Later comes a horse breeder played by Paul Shenar from Best Seller and The Bedroom Window; he proves a more forthright lover!
Meanwhile there’s much talk of some kind of Gulf Shores legend which centers around the 28th of August, much as the back story of The Fog takes place on the 21st of April! Sad to say, however, that no ghosts manfiest themselves here – if any picture could use them, it’s this one!
For it’s slow going, this movie! We get lots of looks at the houses, paddleboats, jetties and carriages the art department discovered or dug up, and all that is fine – ha ha, I preferred it to the scenes of Edna mooning over her neighbor, or acting like a jerk, or to the Age of Innocence-style scenes of tongues clucking at the impropriety of it all!
The acting is largely decent – Paul “Blue Thunder” Roebling is solid as Leonce, and David Marshall Grant not bad as young Robert from next door! Lilia Skala, try as she might, can’t contort her Austrian accent into a Creole one, but it doesn’t hurt her performance much! The big exception, a crucial one, is Sally Sharp, who plays Edna! Frankly, she’s terrible! Unless her character is meant to have time traveled in from 1981, she sounds all wrong for the period, and her line readings are flat and passionless! She also comes across as not a very nice person, even as one sympathizes with all the paternalistic bunkum and honeydew she has to put up with! But whatever her failings as a performer, Ms. Sharp also produced this picture, so I guess the role was hers no matter what!
Ha ha, as early work from the talented cinematographer Robert “Inherent Vice” Elswit, it at least looks pretty nice, though even decent lensing can’t keep the picture from feeling like a poor American cousin to a 1980s-era episode of Masterpiece Theatre! Don’t get me wrong though: it’s not a bad picture, except for that central performance; but it’s a rather lifeless one! There’s a nice score from Shirley Walker, and some fine stylistic touches here and there, and the kind of local seaside atmosphere I was so sorely missing from Summer Catch (a film I’m still very cross at, ha ha!), but on the whole I’ll have to lay back and give The End of August one and a half paddleboats!
Posted by Burl at 12:35