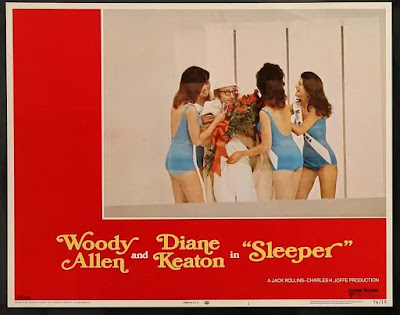 From the future, it’s Burl, here to review the futuristic science-adventure picture Sleeper! Ha ha, yes, this is a Woody Allen picture, the same fellow who brought us Interiors and Midnight in Paris, but it’s one of his earlier ones, from before he was painted with the two-inch brush of disrepute! So, ha ha, I hope you’ll forgive me a little old fashioned movie reviewin’ on one of the bespectacled fellow’s pictures!
Sleeper tells the tale of Miles Monroe, a 1973-era health food store owner who, after a minor operation goes wrong, was freeze-dried, and now, as the picture opens in the year 2573, is being resuscitated by a group of science doctors! Ha ha the many doctors in this picture include Mary Gregory from Troop Beverly Hills, Don Keefer from Creepshow, John McLiam from The End of August, Mews Small from Class Reunion, and Peter Hobbs from The Man With Two Brains!
Of course Miles is surprised to find himself five hundred years in the future, and further shocked to discover the world is has become an anti-intellectual dystopia in which a dopey elite live for pleasure alone! Ha ha! Diane Keaton from The Godfather exemplifies the bubblehead class as Luna, Miles’s unwitting and unwilling partner in crime; but she later becomes radicalized against the government when she meets a revolutionary called Erno, played by John Beck, Pov himself from Paperback Hero!
There are lots of goofy chases set to Dixieland music, and plenty of funny stuff with the domestic robots, one of which Miles must disguise himself as for a time! It all adds up to slapstick aplenty! The best bits, though, are scenes like the one in which Miles identifies (or uproariously misidentifies) twentieth-century people and items for the inquisitive Buck Rogers-era science doctors!
Now, there’s not a lot to this picture, but I’ve always found it clever and jolly! There are plenty of laffs, and according to the editor, Ralph Rosenblum, there were many minutes of deleted scenes that are every bit of funny! But, ha ha, they were probably right to keep it under 90 minutes - a two and a half hour version would likely try the patience, though it might also address the impression I always get of opportunities missed and gags not taken! As is, the picture is little more than an amusing will-o’-the-wisp!
But I’m glad it exists, and it always tickles me to see how little effort they made in creating their future world! Ha ha, but that was the trend in those days: look at the Apes movies, or Soylent Green, or Logan’s Run! Sleeper is funnier than almost all those movies, plus it’s got Rags the robot dog, so I give it two and a half backpack copters!