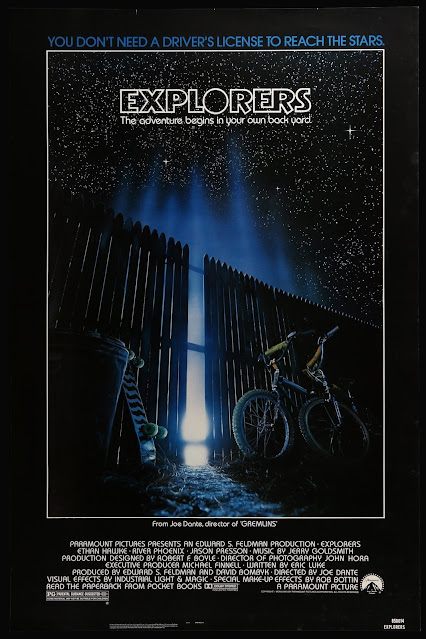 Hi, Burl here to take YOU on a journey to… outer space! Ha ha, Joe Dante seems to have made a real specialty out of directing big-budget Hollywood mainstream movies that somehow still mostly managed to completely dodge the popular mindset as much as the most abstruse art film! He managed this with all sorts of pictures: Innerspace, The ‘Burbs, Matinee, Gremlins 2, Small Soldiers and even Looney Tunes: Back In Action!
Explorers, for its part, sailed past the cultural zeitgeist like a bubble-enclosed Tilt-A-Whirl car hurtling past the moon, and flopped like a fried fish on its summer 1985 release! It’s a great idea for a young persons’ adventure film though, which is probably why I was captivated by it back when I was a young person! I saw it more than once in the theatre, but I guess there weren’t many others like me that year!
Here we find three young lads: a sci-fi loving everyman played by Ethan Hawke, a genius glasses nerd essayed by the late River Phoenix, and the afterward-unknown Jason Presson as a tough-façaded poorboy with mechanical and construction skills! These fellows are caught up in science madness when Hawke’s crazy computer-generated dreams prove to be instructions on interstellar flight radioed in directly to his brain by aliens! The dreamed-up schematics render it possible for Phoenix to generate a flying soap bubble which they can ride around in! Presson constructs a ship out of an old Tilt-A-Whirl car, a garbage can and some other stuff, and they’re off, with esteemed character actor Dick "Rock All Night" Miller staring up at them in awe!
I have to say, as much as I’ve always enjoyed this unusual picture, even back in 1985 I felt somewhat let down by the picture’s final act! The characters themselves are meant to be underwhelmed by what they find out in the nether reaches of the universe, so I guess it makes sense; but by the time they leave the spacecraft and their new alien friends, they’ve made some sort of emotional connection with their situation that the audience just doesn’t share! The special effects are pretty good in a 1985 way, the sets by Hitchcock veteran Robert Boyle are spectacular, and Rob Bottin’s alien suits are sophisticated silliness! And the upshot of it all, which is that the aliens have learned about Earth exclusively through TV broadcasts and therefore believe humans to be violent cretins while they themselves communicate in moronic catchphrases, is an undeniably salient point, if facile even for a young person’s movie!
But the first two thirds of the picture, in which the three young leads all acquit themselves well – and Jason Presson might be the best of these young actors actually, with the subtlest and most complex characterization – and in which we learn that Dick Miller once had these dreams beamed to him as well, makes up for the inadequacies of the space sequences! It’s full of great bits, like the drive-in Starcrash parody, James Cromwell searching for ze bug bomb, or anything involving Dick Miller! And Jerry Goldsmith’s score is grand, one of his best of the '80s! (I wish the songs used in the picture lived up to it – the kids name their spaceship after a Springsteen song, "Thunder Road," but we hear nothing of Boss quality on the soundtrack!)
Ha ha, I’m going to give Explorers three and a half phone calls to Gordon, mostly just for existing! And for Dick Miller too, of course! Ha ha!
Posted by Burl at 11:03