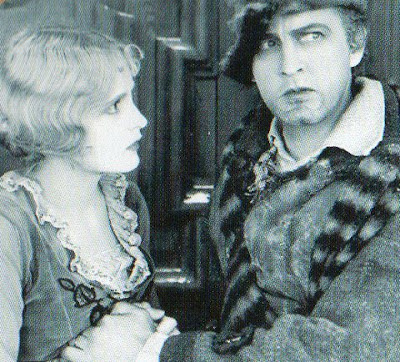 Shhhhh! It’s Burl, here to review a silent movie for you! I really enjoy a good silent picture, and often think I should watch more of them! I haven’t seen that one that came out relatively recently, The Artist, though it seems like the silent aspect might be a bit of a gimmick more than anything! I’ve never seen Mel Brooks’ Silent Movie either, which circumstance I really must remedy one of these days!
The silent movie I’m talking about today is called Eternal Love, and it’s an early picture by Ernst Lubitsch! And yes, before you ask, it has his touch, more so I’d say than his later-period Heaven Can Wait, which was delightful but a bit more ponderous than one hopes for from this brilliant cinematician!
Eternal Love is a mountain picture, and that’s a genre for which I feel a perpetual fascination! From the works of Dr. Arnold Fanck to Leni Riefenstal’s The Blue Light all the way up to Guy Maddin’s Careful, the mountain picture has proven itself to be as packed with delights as a Taverner’s tin is full of fruit drops! Drama, pathos, romantic love: it all seems much magnified in the thin air of the upper altitudes!
In Eternal Love, the hawk-nosed Mr. John Barrymore plays Marcus, a mountain hunter in an early 19th Century Swiss alpenvillage! He’s in love with the beautiful Ciglia; meanwhile, a wild mountain girl (there’s one of these in every mountain picture, it seems!) named Pia is in love with him! And an upright fellow named Lorenz Gruber is in love with Ciglia! Well, this romantic quadrangle is spun into dissaray when the demon drink gets involved one night after a town dance is held to celebrate the departure of the filthy French! Marcus’s hands get a little too busy, and the next thing you know his bedroom’s been invaded! Ha ha, it all goes south from there, with wedding bells a-ringing, but for the wrong sets of people!
A fearsome alpenstorm sets up the final conflict, as is so frequently the case in mountain pictures! Pia thinks Marcus is lost in the storm, and knocks on every door of the village trying, absurdly prematurely, to raise a search party! She ends up at Lorenz Gruber’s house, and he sees by Ciglia’s reaction to the suggestion that Marcus may be lost that his wife is still in love with this rugged mountaineer! Marcus ambles out of the storm safe as a linebacker, and Lorenz Gruber offers him money to leave the town forever! But Marcus, unhappy in his marriage to Pia – and prone to upending the dinner table every now and then – isn’t going to budge! This sets up the climactic events, which involve an absolutely stunning shot of an avalanche, and is altogether one of the most emotionally devastating endings I’ve seen in a movie for some time!
The narrative is pretty compelling, and the acting only occasionally lapses into the big-eyed gesticulating silent melodramas are known for; but it must be said that Eternal Love’s primary virtues are pictorial! It was shot in the Rocky Mountains of Alberta, and there are no end of breathtaking shots and sequences! There are great camera movements to remind us of how free the camera was in the days before microphones hidden in planters, and just plain marvelous direction! I give Eternal Love, which must have been one of the last silent pictures made (and was goat-glanded with a few sound effects here and there, actually) three and a half grimacing gargoyle masks!
Posted by Burl at 20:21