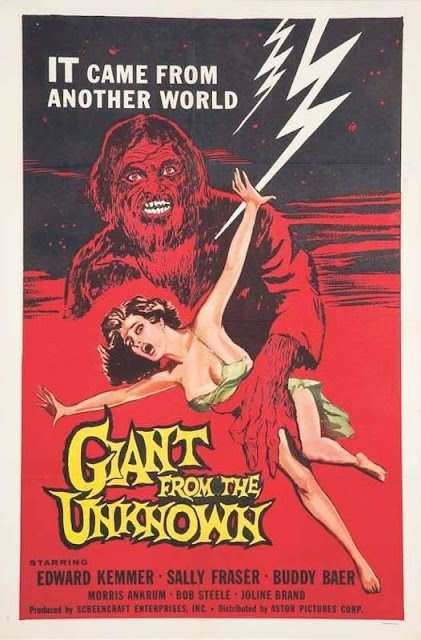 Grrr, ha ha, it’s Burl, towering over you to review another picture! This movie is one of the Four Cunhas, all of which I enjoy to some degree – they have a goofiness and charm all their own, while still fitting perfectly into the low-budget 50s genre niche in which they sit!
But ha ha, I hear you asking: what are the Four Cunhas? Well, they’re the four movies made by a man called Richard E. Cunha way back in 1958! The pictures are, in order of their production, Giant from the Unknown, She Demons, Frankenstein’s Daughter and Missile to the Moon! Ha ha, and they’re all short little movies, probably not much more than seventy-five minutes apiece, so you could have a good little one-night movie marathon with these things! This is an enterprise ol’ Burl heartily recommends!
Giant from the Unknown is perhaps not the most thrilling picture ever made, and not even the most thrilling of the Cunhas! No, it may be the least so, in fact! Not a whole lot actually happens for the first forty-five minutes or so, and if there was ever a movie that needed more giant attacks in it, this is the one! (Of course, more giant attacks would also have helped A Dangerous Method, ha ha and plenty of other movies too, I’ll bet!)
It’s set in a small mountain town in Northern California, where science wizard Morris “Zombies of Mora-Tau” Ankrum is puttering around with his somewhat reluctant daughter Janet, following up on a theory of his that a giant Spaniard might be buried somewhere in the area! A young archeologist, Wayne, runs into the pair, and together they all go upcountry to make a search!
Meanwhile, a local old man has been roughed up to death, and the hardnosed but teeny-tiny local sheriff believes Wayne might be the culprit! Ha ha, he’s not, of course: turns out the rocks in the area have a mystical preservational property that keeps entombed lifeforms in limbo, and the very same Spanish giant whom the professor is seeking – the Diablo Giant, they called him – has recently awoken, and not in the best of moods! Ha ha, it’s another Iberian reanimate, just like in The Vulture! Eventually there are some eerie scenes and a ghostly snowfall straight out of Eternal Love, and then the killer giant is knocked off a dam to his doom! Ha ha!
It’s a good premise with plenty of potential, but sadly the movie ends up something of a black clancy! The makeup for the giant was by the legendary Jack Pierce (he would do I Bury the Living that very same year, ha ha!), but it’s nothing to write home about, unfortunately! There are plenty of charms, however, like the scene in which Janet, on hearing the giant lurking outside her tent, grabs her gun and shoots her bed! And then you have that crazy kid Charlie Brown, Wayne’s pal, played by the guy who would later write the snake-revenge picture Stanley! And on top of that there are some nice mountain locations, some fake but lovely special effects, and the marvelously earnest acting one usually finds in these things!
I like all those Cunhas, as I’ve said, and while Giant from the Unknown may be the least-loved, I’m still going to award it two buddy baers and a hearty clap on the shoulder! Ha ha!
Posted by Burl at 23:11