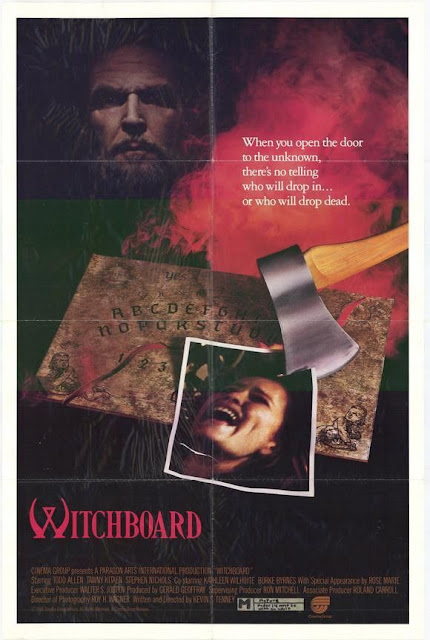 Ha ha and hello, you’ve conjured up Burl, here to review another movie for you! This time it’s Witchboard, an earlier movie from the maker of Witchtrap! Ha ha, the fellow had witches on the brain!
Well before I get into the plot, I’ll tell you that this is one of those movies that managed to get a theatrical release in my town, despite them being cheap and dirty little genre pictures! Time Walker, Deadtime Stories, Strange Invaders and Sasquatch: The Legend of Bigfoot all fit into this category! (Galaxy of Terror would be in there too, if I hadn’t been kicked out of the cinema, ha ha!)
I saw Witchboard at my beloved Park Theater with a couple of pals, sneaking in past the crabby lady who usually demanded to see ID and settling in to watch the story of a young couple, Linda and Jim, who get tangled up with a Ouija board brought into their lives by a slick frenemy named Brendon! Brendon is deeply into Ouija, and he’s made a little ghost friend called David, whom he calls up at a party the couple are holding! Brendon is very obviously played by a soap opera actor, so along with the Ouija board he brings a bunch of soap opera drama, which occupies a good deal of the picture’s running time! Brendon loves Linda, you see, and believes Jim, his former best friend, stole her away from him! Ha ha!
But there’s spooky stuff too! Soon Linda is hooked on Ouija, talking with someone she believes to be the ten year-old David, but who proves after some investigation to be the ghost of a Portuguese axe murderer! A few Omen-style accidents occur: Jim’s pal Lloyd is smushed by sheetrock at a construction site, and a goofy Valley Girl psychic played by Kathleen Wilhoite from Road House is sliced across the neck and hurtled out the window to land on a decorative yet pointy sundial! After this the murderous boogaboo reverts to his old ways and simply puts a chopping on his victims; but how he, a simple shade, is able to tote his axe around and deliver his chops with it is never satisfactorily explained!
Despite the chopping and the slicing I’ve described, the picture is pretty talk-heavy! Luckily the acting is not too bad or this would be truly intolerable! The soap opera guy is a little soap opera-y, and Tawny Kitaen, as Linda, is a bit Tawny Kitaen-y, but they all seem like part of the package, so it works fine for the picture! The main guy, Jim, played by Todd Allen from Django Unchained, is somehow very laconic and So-Cal while still burning with rage and cigarette embers, and by the end he learns to love again; and the cop on the case, one of those movie eccentrics (played by Burke Byrnes from Prophecy, he gobbles down grapefruits and tells long, rambling stories about magic) is pretty artificial! Again, however, they work for this particular picture!
Poor old Rose Marie plays the landlady, and she isn’t given much to do except clean up the mess at the end! Ha ha, the climax she’s cleaning up after is underwhelming, but worth waiting for nevertheless, as it involves the most direct and least sensical way of disposing of a Ouija board that anyone could conceive, dramatized by an hilarious special effect that reminded me of Forever Evil! (There are newer Ouija board movies, I’ve heard, but I haven’t seen them and can only hope they’ve copied this disposal method!) While Witchboard’s occasionally witty script, functional acting and acceptable production serve as feathers in its cap, the lack of ambition and abundance of blab are certainly black eyes! I give the picture two goofy hammerhatchets!
Posted by Burl at 16:27

Email ThisBlogThis!Share to TwitterShare to FacebookShare to Pinterest
Labels: 1980s, horror, saw it on the big screen, supernatural