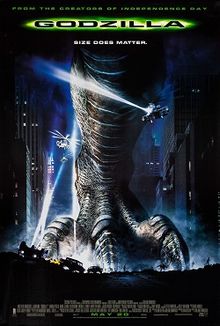 Grr grr and growl, it’s Burl, with a review of the Godzilla picture they made in the 1990s! Yes, it’s simply called Godzilla, and when it was announced that this would be the next movie from the fellow who brought us Independence Day, the world’s response was “Ha ha, of course it is!”
Now, this one took a different approach from the 2014 Godzilla and its more recent sequel! In those pictures, the G man seems to be part of a cabal of god-like Ancient Ones who ruled the world until they decided they would rather live underground, like Titans! There’s a bit of that in the old Toho pictures too! In this 1998 version however, he’s just a big lizard, grown size large because of nuclear testing conducted by the French! Ha ha!
Our unlikely hero is a fellow who’s been studying worms for three years, called Nick Tatopolis, played by the open-faced actor, Matthew Broderick! Ha ha, great sport is made of his supposedly complicated Greek name, which I suppose is in tribute to the monster designer, Patrick Tatopolous, who works regularly for this director! Another dubious tribute the script attempts is to hire Michael Lerner, well known from Class Reunion and Strange Invaders, to play callow Mayor Ebert! I suppose Roger Ebert must have given this guy a bad review for something, so he chose this non-clever revenge, over-extending the gag to include a scene in which his very Siskel-like assistant rates the mayor a thumbs down!
There are a few other characters, some of them played by voice actors from The Simpsons, which is a pretty 90s thing to do! Ha ha! Broderick, wearing a beret for some reason, is carrying a pretty unconvincing torch for a lady who would like to be a reporter, played by Maria Pitillo from Wise Guys; and some non-Godzilla drama results from her stealing Broderick’s secret research materials!
None of the bad guy types - not Mayor Ebert, not the nasty anchorman - get squished by Godzilla, or even get particularly close to him! I assumed both would feel the weight of Godzilla’s bottom, but I was wrong! I guess I have to give it to the picture - it surprised me! Ha ha, I’ll bet they thought about squashing both characters, but just couldn’t fit it those scenes around all the stuff they borrowed from Jurassic Park!
I try to be a positive sort of fellow, so here are a few things I liked about the movie, ha ha! There’s a good deal of carnage, so the picture keeps its end of that bargain; and the trick effects have not dated as much as we might expect! Also, and I’m an easy touch with these things, they did manage to create some empathy for the lizard, and some pathos when he dies! I’m usually on the monster’s side in these things, and so it was here!
On the other hand, the characters were a bunch of nundinckers, not a one of them with much to offer the discerning viewer! Broderick is a likeable enough fellow I suppose, and Jean Reno is the only interesting fellow on view here, and that just barely! The whole thing shuts down for a while to do the raptor scenes from the Jurassic Park movies, and spends so long with the baby dinosaurs in Madison Square Garden that I was reminded of Gremlins 2!
It achieves no surprises except in how narratively unambitious it is! Ha ha, maybe I’m just bitter, because this came out the same day as a movie I made, and it made a lot more money than mine! Well, that was no surprise! I give Godzilla one cup of poor American coffee!
Posted by Burl at 16:11