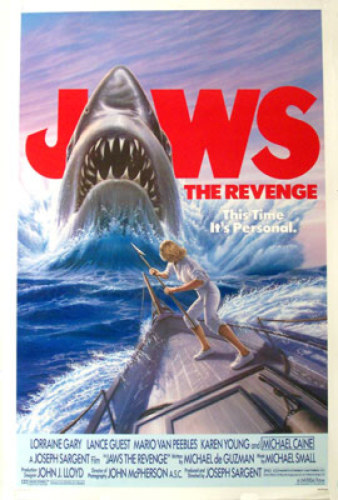 Ha ha, Burl here again! Ooh, something smells fishy! Can you imagine an even worse Jaws picture than Jaws 3-D? Well you don’t have to, because here it is: Jaws: The Revenge! Again I have to mention the absolutely precipitous downfall the series took in only four pictures! I remember going to see this one at the Park Theater as a teen (the same place I saw the original picture, ha ha!), and at the end I came reeling out, my brain snapping with skunkfire, hardly able to believe how bad the movie I’d seen really was!
I recall that it was a summer release, but it’s a Christmas picture when you get down to it! The movie opens in Amity, the scene of the first two shark adventures, to the sound of carolers, with the wife and son of the sadly deceased Chief Brody doing the best that they can on the island! They seem pretty jolly, what with the holidays coming up and all, but it seems that young Sean Brody, who was a cowboy afeard of water in Jaws 3-D, is now a deputy on the Amity PD, and it falls to him to move a harbor log out of the way!
Well, that’s him munched! The action then moves to the Bahamas, where the older son, Mike Brody, works with Mario Van Peebles counting conchs! Mike is played by Lance Guest from Halloween II, and though he’s got a beard and seems to be living the life of Riley in the islands with his wife and daughter, he’s perpetually morose and grumpy, except in those moments when his wife (Karen Young from Heat) is snapping her panties at him! Ha ha!
Old Ma Brody, still played by Lorraine Gary as she has been since the original Jaws, arrives in the Bahamas, and brings the party down still further with her insane conviction that Jaws himself has a grudge against her family and has purposely been eating (or, in Roy Scheider’s case, giving heart attacks to) as many Brodys as possible! Pretty soon though, she’s dancing with Michael Caine, who has swum these waters before, in The Island, and who here plays a loveable pilot rogue named Hoagie! Ha ha, being named after a tasty sandwich would place Hoagie high on Jaws’s menu, one might think, but like so many of the characters, Hoagie escapes without a scratch! He doesn’t even seem to get very wet after crashing his plane in the ocean to rescue crazy Ma Brody, and at any rate he comes out of it in better shape than Michael Caine!
The shark attacks a few people and yanks a luckless lady off the back of a banana ride, and all that sounds much better than it plays! Then comes the climax, with the shark’s heartbeat thumping away thanks to a device created by Van Peebles, and he keeps poking his body fully halfway out of the water and roaring like a dinosaur! The real head-scratcher is the end, when Ma Brody aims her spar right at the shark and he explodes like the Pinto in Top Secret! Ha ha! It’s the goofiest thing you ever saw!
They say this movie was put together on a remarkably tight schedule for a Major Motion Picture - soup to nuts in five months or something like that! Well, it looks it! At least we get a reasonably cinematic look to the thing, with decent widescreen photography and one or two nice underwater shots! Joseph Sargent, the director, has done some good work (The Taking of Pelham I,2,3, ha ha!), but this isn’t among it! No, this picture simply lies there like a dead crappie on the sand! I give Jaws: The Revenge one half of an enormous rainbow lolly!
Posted by Burl at 21:43