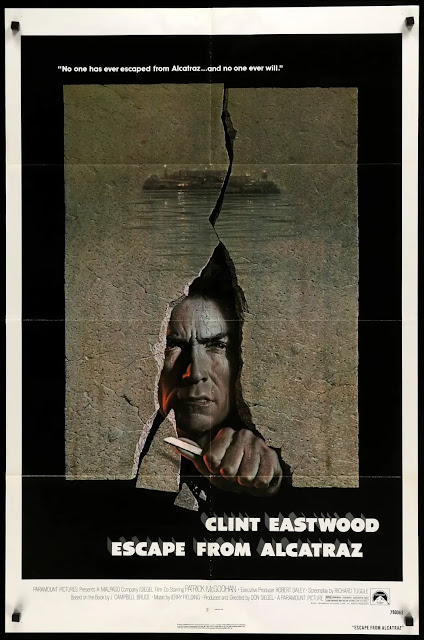 Ha ha and jailcells, it’s Burl! Yes, I have a tale of the big house today, of cons doing hard time, of yardbirds staring down the wrong end of a long stretch! It’s Escape From Alcatraz, one of the many, and maybe the last, of the pictures Don Siegel and Clint Eastwood made together!
What’s it about? Ha ha, the title tells you about everything you need to know! Clint plays Frank Morris, a robber who is sent to the Rock not so much for his robbing, but for escaping from other prisons! Nasty warden Patrick McGoohan dislikes him from the get-go, and Frank spends some time in the lightless bowels of D block! Ha ha, having spent so much time as a prisoner himself, you’d think McGoohan would take it a little easier on his charges!
But no, the steely-eyed turnkey ratchets up his nastiness, causing a terrible incident when he revokes the painting privileges of a kindly dabbler played by the great Roberts Blossom from Christine! Poor Roberts is so despondent that he goes to the wood shop and chops all his fingers off with a hatchet! It’s gory and sad, and for Eastwood it’s the last straw! He begins planning his escape, his first digging tool being the nail clippers he purloined from the darn warden himself!
Eastwood’s pokey pals include Fred Ward from Secret Admirer and UFOria; another guy playing his brother, and yet a fourth fellow, a sad sack called Charlie Butts, well known from Armed and Dangerous, whom you know things are going to go badly for the moment you see him! There’s a tender scene between Charlie and his wife, who’s the only visitor you see anyone get, and in fact the only lady in the whole movie! So you’re rooting for Charlie, but I wouldn’t get my hopes up for him if I were you!
There are some pretty suspenseful scenes and a great cast! Paul Anthony, a very unusual actor of whose work I’m fond, is the one who gives Eastwood the low-down on the place, and it would have been nice to see him get a crack at escaping too! The style of the thing is minimalist, and it’s some of Siegel’s best work of that decade! And that was a good decade for him - he made Charley Varrick after all! And Telefon too, but we won’t talk about that, ha ha!
There’s moody photography from Bruce Surtees, who also shot Out of Bounds of course, and a pretty penitentiary atmosphere! No, it doesn’t make the pokey look like much fun! Except the toques - the toques are nice! And one of the guards seems like an okay guy! But I say no thank you, it’s not the life for me! Ol’ Burl’s going to stick to the straight and narrow! In the meantime, I give the effective Escape From Alcatraz three fake heads!
Posted by Burl at 13:02