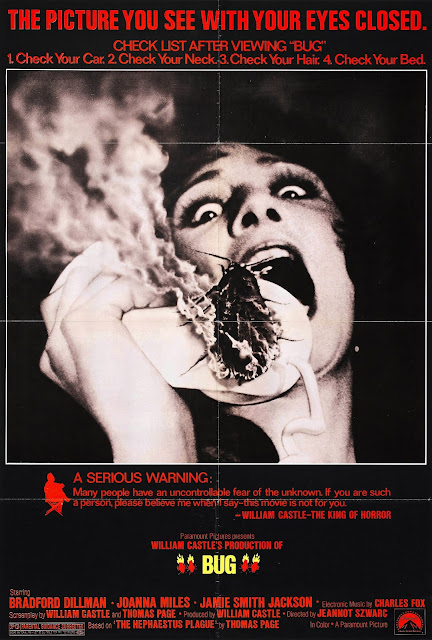 Ha ha and bug-bug-bug, it’s Burl, here to write you up a little review on one of the two intellectual bug movies Paramount Pictures made in the mid-1970s! This one is Bug; an unprepossessing title perhaps, but the movie has slightly grander schemes than might be supposed by someone who knows only the name of the movie!
The other intellectual bug movie released by Paramount that decade, in case you were wondering, is Phase IV, and I call them intellectual bug movies not because the bugs themselves are intellectuals (though, for bugs, they are), but because in both cases there are pretentions to erudition, which, whether they work or not, is in general a quality that pleases me in a horror movie!
Bug is based on a book called The Hephaestus Plague, and I’ll let you decide which title is better! But Hephaestus the Greek god is mentioned by name in the movie, so right there you get some of your book learnin’! The picture opens in a desert church, and when an earthquake shakes up both the place and its parishioners, at least one of the congregation evidently takes it for an Old Testament Wrath-Of-God event, and can be seen supplicating wildly in the aisle!
The quake opens a wide crevasse in a nearby farmer’s field, and some big old cockroaches climb out and start burning everyone up with their incendiary legs! Ha ha, yes, they rub their back legs together and poof! a pickup truck, a kitty cat or a lady’s hairstyle will burst into flames! Local university professor Bradford Dillman, currently teaching Advanced Squirrel, is soon on the case, and after his wife - in a weirdly nervous performance by Joanna Miles - becomes the guest of honour at a six-legged flambé party, he becomes more and more obsessed with investigating these bugs! He grows the same beard he wears later in Piranha (ha ha, his critter-fighting beard, I guess!) and manages, very unwisely, to cross-breed the critters with normal house roaches! Soon, of course they’re spelling words on the wall!
Well, the first half of the picture seems to be building into a disaster scenario, with pick-up trucks bursting into flame and buildings all over town suffering mysterious conflagrations! But all of that stops cold so that, for the whole second half of the picture, Bradford Dillman can put bugs in a diving helmet and freak out his friends with his weird behaviour! And the very ending features the hero suffering a fate few leading men in cinema were ever asked to endure!
The picture was directed by the same fellow who would later bring us Jaws 2, and was attractively shot by Michael Hugo, who lensed The Manitou! Ha ha, along with this latter picture, Bug features in my personal list of Weird Midbudget 70s Horror: a cherished group of films indeed! But Bug itself is not terribly high on the list, I must say, and I give it two exploding pick-up trucks!
Posted by Burl at 14:09