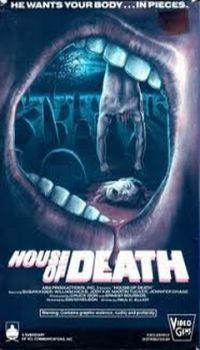 A creak on the stairs, and a hearty ha ha - these things mean it’s Burl, here to review yet another seedy good-time slasher picture for you! Like so many of them, this one goes by multiple titles, but I believe it may be best known as House of Death! It’s a slightly perplexing title, as, while there is indeed a house in the movie, much of the death takes place in a variety of non-house locations! Perhaps the film's alternate title, Death Screams, would be preferable, if equally generic! But oh well, a title like House of Death will do the job, I suppose!
Ha ha, it’s a regional picture, having been made in, I believe, South Carolina, with some of the same cast and crew as Final Exam! And while Final Exam was more fun than I’d been led to believe, as a slasher movie it’s still a bit on the dry side, both figuratively and literally! House of Death seems to be treading the same path for most of its running time, and then in the last ten minutes or so, they unleash first a soundtrack of bombastic music and bloodcurdling screams, like something from a Coffin Joe movie, and then their special effects man, Worth Keeter (the same fellow who made the fur-face picture Wolfman) to add a dose of blood and gore!
But I’m getting ahead of myself, as usual! House of Death starts with a couple of killings down by the river: a couple making sweet love on the back of a motorcycle is suddenly wrapped in razor wire! There’s a great shot where they and their motorcycle roll backwards down into the water, and then, now and again through the rest of the picture we see their bodies floating down the river, unnoticed by anyone, at least until a crucial moment!
We then meet a bunch of characters: a baseball coach and his assistants; a couple of musclemen and their ladies; a jokester named Diddle; a tubby man of limited intellect; a giant bearded sheriff; a shopgirl played by Susan “Happy Hooker Goes Hollywood” Kiger, who lives with her grouchy, arthritic grandma; and more! There are so many of them that I can’t recall who lives and who catches a poking! It might have made for a decent mystery, all these characters, if it wasn’t the sort of movie where you don’t spend a moment wondering or caring who the killer is!
But I do remember the unfortunate Diddle meeting his maker in an outhouse, an entirely apt location for his demise! And I recall a lady getting cut in half; one of the musclemen falling into an open grave and, in trying to climb out, getting his hands cut off á la House on Tombstone Hill; and a pair of decapitations! And then the killer is identified, and he has his throat slashed with a piece of glass, is shoved out a window, falls two stories, lands in a garden shed and is impaled multiple times, and then is shot by a passing lawman, and the cop’s bullets are so powerful that the killer’s head simply explodes as in Scanners!
All of this happens in the comparatively energetic last ten minutes, but the first seventy-five are passably entertaining too, in a homely sort of a way! There’s no style, not a whit of spookiness and precious little wit, so it’s hardly a good or great movie! But the slasher completest, particularly the regional slasher completest, will, I believe, not be disappointed! I’m going to sit back and give House of Death a rousing one and a half short shorts!
Posted by Burl at 14:05