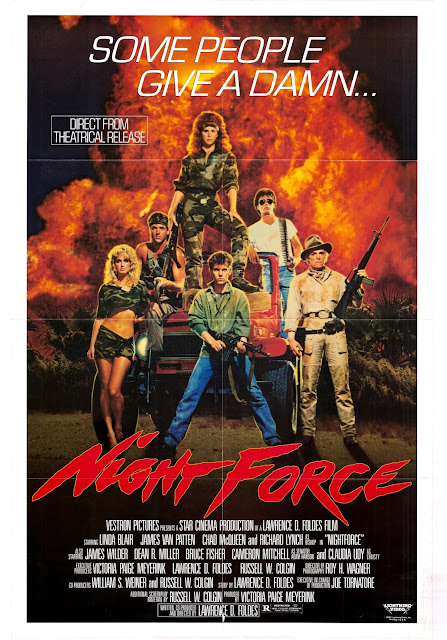 Well hoot-n-holler, boys, it’s Burl, here to review some Reagan-era action! Ha ha, the picture is called Nightforce, all one word according to the title card, and politically speaking, it’s about as Reagan-era as you can possibly imagine! That’s not exactly the kind of thing I like to watch on its own merits, but I do like to laugh at them! Ha ha!
Story-wise it’s a kind of proto-Collateral Damage! We are introduced to a group of college-age pals, most of them a bit jerky in one way or another! One of them, Christy, is the daughter of Senator Cameron Mitchell, an actor whom we know from so many pictures, from Without Warning to Raw Force! Anyway, there’s some soap opera stuff, and then Christy is kidnapped by a vanful of burly guys in fatigues - it’s South American terrorists again!
Cries Senator Cameron Mitchell, “Gnarr! There’s nothing I can do!” So it’s up to Christy’s buddies and secret boyfriend to go and rescue her! Among them are a goofball mechanic, a macho gun freak who brings along his bazooka, a sort of random cool dude guy, and Linda Blair from Roller Boogie! The secret boyfriend is a burly fellow with a bad case of Resting Idiot Face, and he’s ready to do what it takes to get Christy back despite the drunken, insecure ravings of the social-climbing brother from whom he stole Christy’s affections on the very day she and the brother were to be married! (Ha ha, I told you there was soap opera stuff!)
Once they’re in South America and looking for the terrorists’ encampment, the kids hook up with flute-playing, serape-wearing ex-soldier Richard Lynch, whom you probably know from The Premonition, but won’t recognize here ‘cause he isn’t wearing clown makeup! Meanwhile Christy sits naked in a cage in the middle of the camp, repeatedly brutalized perhaps, but treated with kindness by the potato-faced midget who guards her! There’s a climax of exactly the sort of action you expect when renting a low-budget 80s, and then the 82 minute picture is over!
This isn’t a Ridiculous Action movie despite the direction by Lawrence D. Foldes, whose Young Warriors very much is, and the presence of Mitchell, who seemed pulled to RA pictures by some sort of gravitational force! Foldes, evidently the kind of auteur to order a box around his name in the opening credits, was obviously trying to play serious here, and even, judging by the sympathetic potato face, a little bit nuanced! It’s nevertheless shot through with Ridiculous Action moments, but not of a high enough concentration to qualify it for the larger Ridiculous Action genre!
I still recommend it to the RA completests though, because it’s really only a few punji sticks and a crate of New York Seltzer away from Deadly Prey! It could use a few more novelty killings and some more tomato paste too! But on balance I feel confident giving Nightforce one and a half comfort-serapes!
Posted by Burl at 17:32