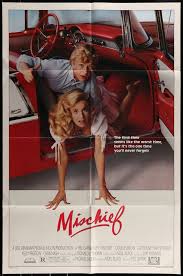 A-womp-bomp-a-lula, a-womp-bam-Burl, hello! I’m here to review one of the milder Period Teen Sex Comedies of the 1980s, Mischief! It’s another of the erotic children of American Graffiti, a slightly fancier version of Slumber Party ’57, Sweater Girls, Hometown U.S.A., Porky’s of course, and the Lemon Popsicle movies! Yes, that’s right, it’s a nostalgic look back at how teenage boys lost their cherries back in the niftyfifties!
I guess the message is, ha ha, plus ca change, because it was not so different for me in the 80s! But I never got so unpleasantly aggressive as our supposed hero here, Jonathan! As played by Doug McKeon, Jonathan looks ready to bust into a chorus of “Sweet Mr. Sansregret” at any moment, yet he’s capable of putting so much erotic pressure on his ladyfriend that he rips her underwear off by main force! Thankfully he relents after that, and briefly even seems to feel bad about it!
I’ll backtrack a bit and give you the bigger picture! Mischief is set in some small Ohio town in the late 50s, and the big event on Jonathan’s street is the arrival of a cool-daddy Fonz called Gene! Gene roars around on his motorbike, and his father - no, not his stepfather, ha ha - is played by Terry "Silver Bullet" O’Quinn, who yells at him a lot and even clobbers him on occasion! But Gene and Jonathan become pals even though they’re different sorts of fellows, and Gene is even willing to help Jonathan achieve his goal of “makin' it" for the first time with the seemingly unapproachable object of his lust, a good-time blonde named Marilyn! Ha ha, she’s played by Kelly Preston from Christine and Secret Admirer!
Meanwhile Gene falls for Bunny, played by Catherine Mary Stewart from The Beach Girls and Dudes! This gives rise to conflicts with Bunny’s sometime boyfriend, the biggest jerk in town, played by Ron Johnson himself! Ha ha! And sooner than you think, and to no one’s greater surprise than his own, the hapless Jonathan is dating Marilyn! And then, in the usual ritual of awkward jim-jams and breathless broken promises and abrupt endings, the deal between them is sealed! Ha ha!
But is there any true mischief in this movie? As a studio picture, albeit a small and relatively inexpensive one, the picture’s antics are on the softer side of things! But they still have an erotic flavouring: for instance, at one point Jonathan is forced to stand up in class while “feeling the king’s anger,” as they say! There are some pranks and other shenanigans, and a visit to the drive-in of course, which is always a treat, and trouble and punch-ups and chicken races! In the end true love prevails between Bunny and Gene, and Jonathan discovers his true passion: Jami Gertz from The Lost Boys!
Of course, as in all of these pictures, the soundtrack keeps very busy! It features just as many 50s hits - and many of the same 50s hits in fact - as a Lemon Popsicle picture! The small-town atmosphere is nicely maintained, and the performances are just what’s needed! Chris Nash makes a pretty good Gene, and Doug McKeon has the perfect look as the nebbishy Jonathan! It also looks fine, with pastel cinematography from Donald Thorin and Jan de Bont!
There’s not much there there in Mischief, but it’s a pretty painless little nostalgia-coction! Unless you're from the 1950s and your teenage life went just like this, you'll probably forget all about the picture two seconds after it ends! I give Mischief two turned-around teddies!
Posted by Burl at 22:22