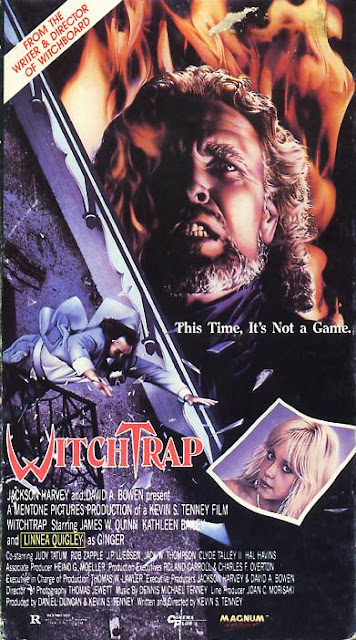 Good day, it’s Burl! Yes indeed, it’s time for another movie review, and this time I’m going to tell you about a spooky movie, or at least a movie that’s meant to be spooky, from the director of Witchboard! I remember seeing that one at the local movie theater, which seems such an oddball proposition nowadays, it being such a low-budget picture!
This one is called Witchtrap, which proves that this is a director who enjoys working on a theme! In this case there are no Ouija boards, though; instead it’s a movie in a genre I really like, the haunted house investigation picture! The Haunting is one of the best of these of course, and The Legend of Hell House is another fine example, and the question for anyone going into Witchtrap is: how will this stack up against these ghostly classics?
Ha ha, not too well! But it’s not a simple case of good movie/bad movie, because while Witchtrap is most certainly a bad movie, it’s not without its special charms! I’ll tell you the story: after a prologue in which a rhinestone-jacketed fellow hurtles out the window of a large mansion, the guy who owns the place hires some parapsychologists and a bicker-prone security team to exorcise the evil spirit haunting it, or else prove it’s all just bunkum and honeydew!
I’ll tell you, there’s a lot of arguing in this movie! The hero, whose square-jawed, quasi-Ash appearance underlines this picture’s Evil Dead pretensions, is extremely vocal in his opinion that all this ghost stuff is just so much codswallop! He also doesn’t like his boss much, and says so at every opportunity! It’s a great relief when the killer phantom, who's an evil magician, begins killing off the gang; though he makes a tactical mistake in my opinion by starting with their cameraperson, played by that great star of horror, Linnea Quigley! Ha ha, she gets a pixilated shower head in the throat, which is an odd way to go, but it helps fulfill what I assume is a contractual demand on Quigley’s part that she take off all her clothes at least once per picture!
It’s not a very scary movie, and some of the acting is not just poor but extremely poor, and the interiors of the spook-ridden mansion are not very atmospheric, a crippling condition for any haunted house picture! It seems to have about three times the dialogue required to tell the story, and the behaviour of the characters goes well beyond simple horror movie idiocy into the sort of decision-making you might expect to find in one of Otto Muehl’s Actionist happenings! Ha ha!
But there’s a home movie charm to it, and a few moments of budget cleverness! I liked that it made game attempts to deliver the goods, even if the workmanship on those goods was a bit shoddy, and a number of them had clearly fallen off the back of Sam Raimi’s truck! For trying, I’m going to give Witchtrap a sound one and a half bulletproof handymen!
Posted by Burl at 14:14