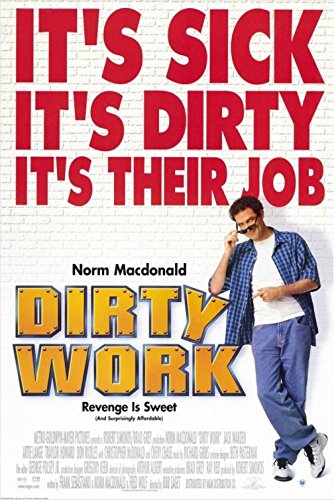 Hi there! It’s Burl, here to review one of the forgotten 90s comedies, and no, it’s not Chairman of the Board! Ha ha, this one is Dirty Work, which was supposed to be Norm Macdonald’s shot at movie stardom, but I guess it didn’t take! I suppose in one sense I can see why - it’s hard to imagine Macdonald’s particular shtick traveling beyond this one exact movie, the way Bill Murray’s did from Meatballs into Stripes, and Ghostbusters, and beyond!
He plays one note, and you’ve got to like that note! I happen to like it, and so I hold Dirty Work in much higher esteem than perhaps it deserves! On the other hand, because it hardly lives up to what I see as its potential, I am just as likely to feel more harshly about it than an average moviegoing citizen might! Ha ha, I guess we’ll see in this review! My money’s on a swirling, expansive whirlwind of both feelings simultaneously!
Norm plays Mitch, a fellow who, as happened to Murray in Stripes, loses his job, his girlfriend and his apartment all in one day! Instead of joining the army with his best pal, he decides to open a business with his best pal - a business perpetrating revenge tricks on behalf of anyone willing to employ them! Mitch’s best pal is Sam, and there are additional complications involving Sam’s dad Pops, played by good old Jack Warden, and the heart transplant he needs in order to survive and continue his campaign of curmudgeoning!
But the bits that really work are the revenge tricks and the little associated bits, as when Mitch has to take work as an experimental brownie tester and suffers an hallucination of Gary Coleman, from The Kid With the 200 IQ, in the role of the devil, cackling with evil glee! There are all sorts of bizarrities, which I always appreciate in an apparently straight arrow comedy picture! It captures about thirty percent of what’s funny about Norm Macdonald, which is actually higher than one might expect with a mid-budget studio comedy!
It’s a pretty 1990s picture! Mitch’s shirtwear choices alone locate it firmly in that decade! Chevy “Fletch” Chase and Don “Beach Blanket Bingo” Rickles anchor the old guard, but much of the cast is 1990s comedians, like Artie Lange as Sam, and Chris Farley as the half-nose barfly and skunk-looser! And it sure was nice to see George Chuvalo, the ill-fated arm wrestler in The Fly and a champion boxer in his own right, as the ring announcer!
Ha ha, it has a very 1990s soundtrack too! Of course it has Semi-Charmed Life by Third Eye Blind and Tubthumping by Chumbawumba, and songs by Better Than Ezra, Green Day, and The Reverend Horton Heat, and there’s an ironic use of Escape (The Pina Colada Song) and a heartfelt one of AC/DC’s Dirty Deeds (Done Dirt Cheap)! How the Spin Doctors escaped this playlist I don’t know! Ha ha, this isn't the stuff I was listening to back then, but it fits the picture well enough! They should have found a use for that Steely Dan song that shares a title with their movie, though!
I can’t say I love this picture, but I am fond of it, even though I wish Macdonald, his co-writers and director Bob Saget had found it within themselves to do something with a little more danger to it! It’s littered with funny bits, so I’m going to give Dirty Work two and a half bearded ladies!
Posted by Burl at 16:57