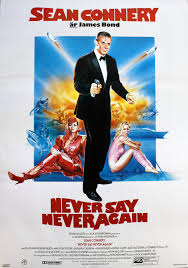 Doo-doot-de-doo, ha ha ha! It’s Burl here with a little off-piste Bond for you! Yes, it’s Never Say Never Again, Sean Connery’s big return to the role after a decade of watching Roger Moore make movies like Live and Let Die and Moonraker! It was made by another company than usual, so they couldn’t use the theme or the same actors to play M, Q and Moneypenny! Ha ha, the worst thing is not using John Barry’s great action music and choosing to replace Barry not with James Horner or Jerry Goldsmith or someone who made sense, but with Michel Legrand, a composer forever tilting at the windmills of your heart! He’s not the first one to try ruining a Bond movie with an elevator jazz score, but it hurts a little more because the movie is otherwise decent!
Or anyway it’s decent compared to the contemporaneous Moore ones! Now Connery is a little older here, sure, but he’s in fine shape! He does tread the line between confident relaxing and lazy coasting at times; on the other hand one can’t deny that he delivers the quips better than ever! And for gosh sakes, he’s Sean Connery, who can kick around leprechauns while growling “Get away from me, you bashtards,” and still seem like a heck of a guy!
The plot of Never Say Never Again is really just Thunderball with more video games and (marginally) fewer high colonics! Bond’s fitness is in question by a particularly priggish M, so he’s bundled off to a special clinic! Trouble comes right after Bond does, and soon a hulking beardo is chucking him around the room! This all leads to missiles under the sea and an entertaining, smile-based performance from Klaus Maria Brandauer as the bad guy, Largo! Along with Skyfall and maybe one or two others, this is one of the few Bond pictures with a straight-up insane man as a heavy! It’s too bad we don’t get more of Max Von Sydow as Blofeld, but you can’t have everything! At least we get Barbara Carrera as the kill-crazy Fatima Blush!
There’s some okay action, but not that much of it! Kim Basigner’s buttocks make a featured appearance; Bond sleeps with so many ladies that it’s as if he’s trying to make up for a decade of inaction; and there’s a super motorcycle that doesn’t do much besides make a few rocket-powered leaps! Ha ha, it doesn’t even seem all that fast, and Bond falls into traps so easily while riding it! And I have to say the final confrontation below the sea is a little underwhelming too! But at least there’s much less boring scuba fights than there are in Thunderball! Ha ha, I like Thunderball, but that stuff really drags it down!
On balance it’s an okay slice of Elderly Action, but it looks better than it is if you put it beside movies like Octopussy, which everyone did because they were the two rival Bond pictures that came out in the same year! I’m overrating it, I know, but, if only for the moment in which one of Q’s devices doesn’t work all that well, which in real life would happen all the time, I’m going to give Never Say Never Again two exploding femme fatales!
Posted by Burl at 13:41