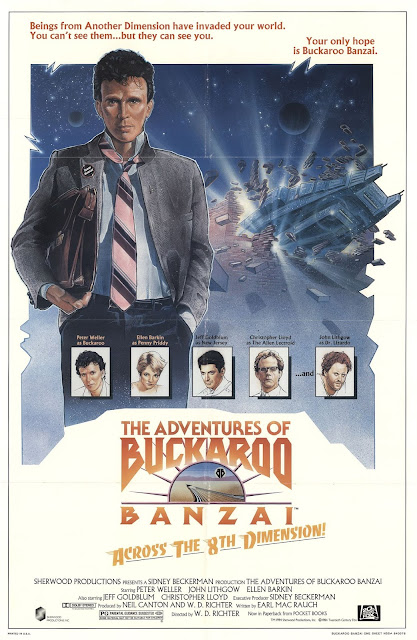 Burl here, and wherever that is, here I am! In media res has come to refer to scenes that begin while already in progress, like in the middle of a fight or some such! Really in means being thrown into the middle of an entire story, which few movies attempt! One picture that does, and which I’ve always admired for doing so with such absolute commitment, is The Adventures of Buckaroo Banzai Across the 8th Dimension!
Despite this being his first adventure in any form, Buckaroo (played by Peter Weller, whose face we know so well from Robocop) is already an established hero of comic books, a hitmaking musician, a cutting-edge brain surgeon, a nuclear physicist, and the leader of a rag-tag bunch of busriders, The Hong Kong Cavaliers! He has a worldwide following of fans called the Blue Blaze Irregulars, ready to swing into action at a moment’s notice; a dead wife; and a mortal enemy called Hanoi Shan!
But all of this is background, and has little to do directly with the story, ha ha! And I love it! I love that someone was willing to spend a lot of money on a picture that almost dares you to understand it, and so esteems the intelligence of summer sci-fi action movie audiences! I think the set decoration is nonpareil, and the layered dialogue, recalling Altman at times, keeps the picture interesting over multiple viewings!
Innovative things are often said to be ahead of their time, but I think that phenomenon is much less common than is supposed! I think Ulysses was ahead of its time, and the Nude Descending the Staircase, and the Velvet Underground, but, ha ha, not a whole heck of a lot beyond that! I think Buckaroo Banzai fits this category; and the proof is not just that it suffered a serious blanketing at the box office and has now become a beloved cult item, but that so many movies have since paid fealty to it! From The Life Aquatic to Thor: Ragnarock, the Buckaroo acolyte is recognizable by the presence of Jeff Goldblum in the cast! Ha ha!
And speaking of cast, this picture’s got a dandy one! Weller and Goldblum are backed up in the Cavaliers by the likes of Clancy Brown (from Highlander) and Lewis Smith (from Django Unchained) and Pepe Serna (from Fandango), and the nasty Red Lectroids who serve as antagonists include in their number John Lithgow, who leads them, and Christopher Lloyd, Vincent Schiavelli, Dan Hedaya and the like! All these latter guys are named John, ha ha, which is a detail I’ve always treasured!
You’ll notice I haven’t said much about the plot of the picture, and that’s because there’s not a lot of plot there to speak much about! I mean, there’s a plot, but somehow it’s the least important, least interesting thing about the movie! It’s not a picture for everybody, but those who like it, like it a lot! Ha ha, I give The Adventures of Buckaroo Banzai Across the 8th Dimension three and a half Small Berries!
Posted by Burl at 22:29