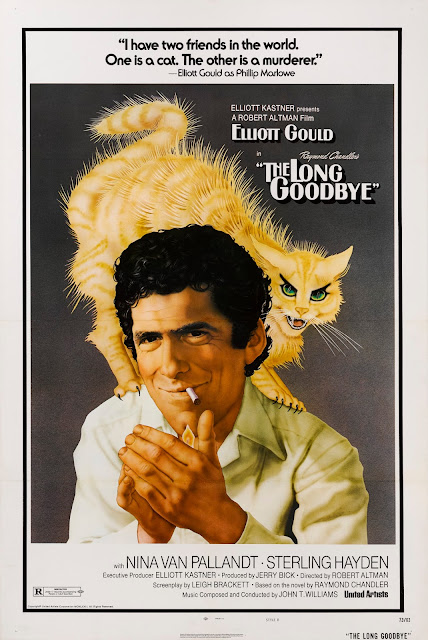 With a scratch of the match it’s Burl, here to review a hard-boiled detective story in shaggy 70s garb! Of course there are movies like The Late Show, and I’ve already reviewed The Big Fix, Klute, and the great Night Moves, but all must bow to the king daddy of Me Decade noir revamps, The Long Goodbye!

Ha ha, this is a long-time favourite of mine, with the only turn-off being the running theme of domestic violence against ladies! It’s not as though the movie endorses this, but it’s hard to watch sometimes! Given that, it’s amazing how delightful the movie nevertheless is in telling the story of how the scales fall from Philip Marlowe’s eyes and he finally ceases to be the most passive detective in film history! Ha ha, and at the end of the picture, after Marlowe has finally asserted himself and taken direct action, he’s so delighted with himself that he dances a merry jig!

Back to the start, however: Elliott Gould from The Silent Partner is Marlowe, who lives in a scrumptious tower building near the Hollywood Bowl and has a gang of topless candle-dipping yoga hippies for neighbours! The opening fifteen minutes of the movie are devoted to Marlowe’s efforts to feed his cat, because that’s just the sort of picture this picture is! Soon his buddy Terry Lennox, played by the famous horsehidesman and inventor of Big League Chew, Jim Bouton, appears at Marlowe’s doorstep and requests a ride to Mexico, which Marlowe grants! And thus begins his troubles!

Nina Van Pallandt from The Sword and the Sorcerer and the fantastic Cutter's Way plays Eileen Wade, who calls on Marlowe to find her husband Roger, played by Sterling Hayden from Dr. Strangelove doing John Huston playing Ernest Hemingway! Hayden is terrific as the blustering beachside author, and Marlowe quickly locates him at a clinic run by Dr. Verringer, a role essayed by Henry Gibson from Innerspace and Tulips at his near-slimiest! All this would seem to have as much relation to the main narrative as Marlowe’s troubles with his cat, and this turns out to be the case, in that it has plenty to do with it! Ha ha!

Marlowe also has troubles with a vicious gangster called Marty Augustine, and when you want someone to play an unpredictably brutal crime lord, who better than the director of On Golden Pond, Mark Rydell? The picture also features little appearances by the likes of David Arkin from Cannonball, David Carradine, whom we recall from Armed Response, Rutanya Alda from The Stuff, Arnold Schwarzenegger from Predator, and George Wyner from Fletch! And then of course there’s the security guard who does impressions: a marvelous creation indeed!

It’s one of the most Los Angeles movies ever made, and I guess that’s really saying something! It’s also, I suppose, one of the most Robert Altman movies ever made, though not necessarily the Robert Altmaniest! (M*A*S*H or McCabe & Mrs. Miller or Nashville or even Short Cuts might take that prize!) And finally it's one of the most 1970s movies ever made, ha ha, which is another feather in its cap so far as I'm concerned! It undoes the detective genre, subjecting its gumshoe to a series of indignities, inconveniences, and downright punishments, all the while underlining how decent a fellow he is at heart! But, ha ha, he’ll only be pushed so far, though that limit is a lot farther than a Marlowe played by, say, Bogart would accept!

Quite frankly I think that if I made a list of my top twenty movies, this would be on it! It has a singular atmosphere, note-perfect performances, great and understated cinematography, and a theme song that plays over and over again, on radios, in supermarkets, or by the efforts of a Mexican marching band! It’s a very special motion picture, and if you haven’t seen it, I thoroughly recommend it, with the caveat that it contains some very unpleasant violence against women! I give The Long Goodbye four Walter Brennan impressions!