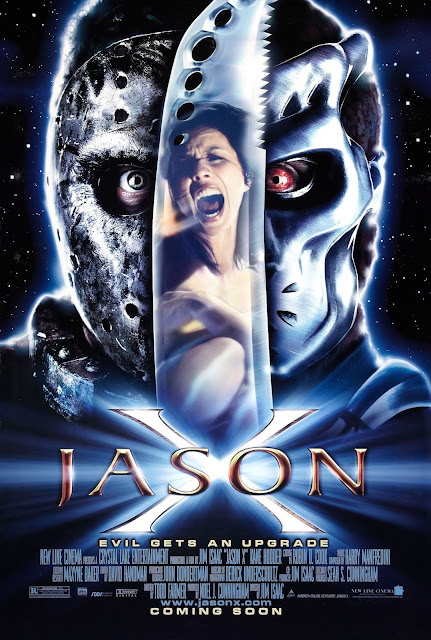 Hi, it’s Burl reporting… from space! Yes, it’s Friday the 13th, and therefore time to review another Friday the 13th picture; and this is one I went to see at the theatre on a date with my then-new girlfriend who later married me anyway! Ha ha! It’s not a good picture, but it was a fun date anyway, because after all, who doesn’t want to see Jason in space! Of course only one picture fits that description, and it’s called Jason X!

Was it a good idea to send Jason into space? I can see the reasoning: ever since the original Friday the 13th, he’s been skulking around the same summer camp, more or less: at the camp in part 2 and part 6; around nearby homes in part 3, part 4 and part 7; at a local halfway house in part 5 (and that wasn’t Jason anyway); and of course by part 8 they became hysterically desperate to find something different for the goochy-faced madman to do, so they put him on a boat bound for Vancouver! Ha ha! So where else was there for him to go but space?

The picture begins in the Crystal Lake Research Facility, where Jason is being held in chains and being prepared for cryogenic freezing! In charge is an evil doctor played by none other than the director of Scanners, Fast Company, and so many more, David Cronenberg! Ha ha! I guess he was doing it as a favour for his buddy, trick effectsman Jim Isaac, who directed the picture (and who had earlier made The Horror Show)! Anyway, Cronenberg performs his silly lines with the requisite seriousness, then, when Jason escapes, tries to run away but suffers a flying impalement!

Jason ends up getting cryogenically frozen anyway, just like Walt Disney, and so does the science lady who’s been studying the masked killer since he was captured! Four hundred years later a spaceship visiting the now uninhabitable Earth retrieves the pair and revives them! As the ship is populated by a gang of students and their venal professor (played by Jonathan Potts from Body Count, ha ha!), the picture then becomes a spacebound retelling of part 8, with a revived Jason applying some futuristic killing methods (a face-freezing-and-smashing scene is perhaps the most memorable) as well as garden-variety pokings to the students and the crew!

There are some very 2001-era trick visual effects, by which I mean they’re not up to the standards set by the movie 2001 back in 1968, ha ha! The ship itself is very much the type that feels more like a studio in Toronto than an actual working craft, and there’s a distinctly Canadian feel to the whole production - yet another echo of the dire Jason Takes Manhattan! This maple leaf feeling is amplified by the presence of Potts and Cronenberg, as well as a cameo from Robert Silverman, whom we know from so many Cronenberg movies and also from his appearance as Mr. Sykes in Prom Night!

There are clever moments, like the use of the holodeck to recreate Jason’s usual campsite environment and thereby distract him! There’s a lady robot and some nanotechnology, and for whatever reason Jason is turned into a super robot version of himself! The whole is a dog’s breakfast of fan-fiction level ideas afflicted with the usual lack of affrights, though it’s all as slickly produced as any Friday the 13th picture ever was! It was mildly fun to see it on the big screen, and though it’s bad, some pleasures remain, and so Jason X gets a rating of one and a half nanobots from me! Ha ha, and have a happy Friday the 13th, everybody!

Email ThisBlogThis!Share to TwitterShare to FacebookShare to Pinterest
Labels: 21st century, horror, Jason, saw it on a date, saw it on the big screen, sci-fi, scientist, sequel, slasher, space