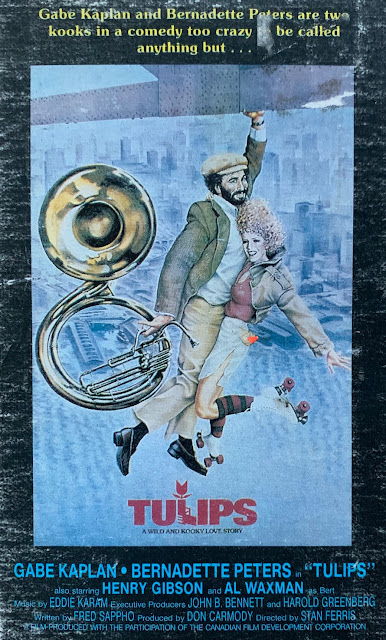 Ha ha to everybody, and again I say ha ha! It’s Burl, and I’m here to review a picture by the name of Tulips! Now, in response to this you’ll surely say “Tulips? Ha ha, nope, never heard of Tulips!” And there’s no reason you should have heard of it, so don’t worry! It’s an obscure Canadian tax shelter production that looks to have been more troubled than most, given that it had at least three different directors, working under the umbrella pseudonym of “Stan Ferris!” Ha ha!
The picture stars the rosy, bearded lips of Gabe Kaplan, which fleshy proboscises you may recall from Fastbreak! They play the rosy, bearded lips of Leland Irving, a tuba player and introvert whom we are informed is a genius, though little evidence of this is seen! His brother, played by the King of Kensington himself, Al Waxman, whom you’ll remember from his grisly inflations in Spasms, is constantly giving him advice on how to get out and meet people! After the hair plugs he endures at his brother’s instruction net him only ridicule, Leland decides to kill himself! His attempts are repeatedly foiled, so he hires an effete hit man called Mr. Avocado, played by Henry Gibson from Nashville and Innerspace, to do the job for him!
Meanwhile, kooky waitress Rutanya, played by Bernadette Peters, who is well known from Vigilante Force, The Jerk and of course Heartbeeps, quits her job and is rejected by her married-man boyfriend, and so falls into a similarly suicidal funk! Ha ha, God save us from kooks and kookiness! Of course the two characters meet and fall in love, and many allegedly hilarious things ensue, and then Leland remembers he’s to be assassinated and that puts a pall on the romance! It all ends with a confusion in which Leland plants a bomb in Mr. Avocado’s car, but then Rutanya ends up inside the car as she tries to plead for Leland’s life! The car blows up, apparently incinerating both Rutanya and Avocado, and a devastated Leland crawls into the gutter and swallows a bottle of pills! Ha ha!
Of course there’s a happy ending in which Rutanya turns out to have jumped out of the car at the last moment, and Leland’s pills don’t actually kill him! But my goodness, even with that, it’s one of the least funny movies ever made! I’ve never found suicidal depression especially uproarious, but if there’s dark humour to be mined from such situations, this picture never strikes a vein! The funniest thing in the whole affair is Leland’s tuba playing, and that’s not any funnier than any tuba playing is!
Like Taking Lives, the movie takes place in an undisguised Montreal, but absolutely no special use is made of this location! The cast has some talented people in it, notably Bernadette Peters, and she’s the only one who seems to be trying! Ha ha, Kaplan must walk that fine actor’s line between depressive and disinterested, and though I feel he was probably committed to the role, he doesn’t really sell it! The spark that is supposed to exist between the two leads is pretty damp, too! And Henry Gibson, so nicely if arbitrarily evil in The ‘burbs, mostly just lurks here! Ha ha, he lurks outside of windows, on bridges and across streets, lurk, lurk, lurk!
If you’re wondering what the title means, “tulips” is some sort of code word Gibson uses to indicate he’s ready to start his program of assassination! It doesn’t make any more sense than anything else, and nor is it funnier than anything else! And nothing else is very funny at all! I give Tulips half a hair plug, which is among my very lowest ratings!
Posted by Burl at 09:56