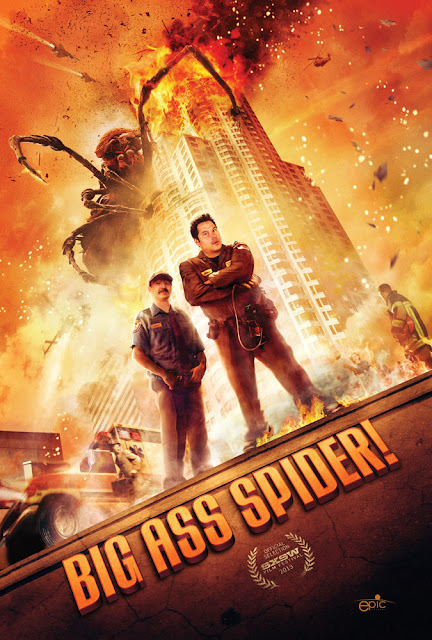 Ha ha and cobwebs, it’s Burl, here with a review of a big bug picture that keeps one antenna on the late-model Roger Corman DinoCrocoCentiSharknado school of filmmaking, and the other on slightly more serious-minded numbers like Tarantula and Them!! Sprinkle this concoction perhaps too liberally with Aliens, ha ha, and you’ve got Big Ass Spider!!

Our hero is a husky, good-natured exterminator called Alex, played by Greg Grunberg from Mission Impossible III! After an encounter with an old fruitcake (played by the ubiquitous horrorslady Lin Shaye) in which he suffers a brown recluse bite, Alex heads to the hospital for treatment, where, with admirable narrative economy a big, though not yet big ass, spider emerges from a mistakenly-delivered corpse! Ha ha, of course it’s the result of some kind of Army experiment, and the military is soon on the scene, led by a colonel or a major or whatever played by Ray Wise from RoboCop!

A fashion scientist played by Patrick Bachau from A View to a Kill is tagging along, making dire pronouncements about the exponential growth rate of the enormous eight-legger, which in the meantime is traveling around the hospital melting the faces of elderly patients and growing ever larger! Alex and the hospital security guard who has become his new sidekick are hot on its cribellum as the arachnid breaks out of the hospital, legs it to a park, and begins munching on picnicking families, beach volleyball girls, and Lloyd Kaufman of Troma!

The picture moves along quickly until a very Aliens climax at the top of a building, where the spidey has cocooned a number of people, including the army lady Alex has a crush on, and laid soon-to-hatch eggs all around the place! Some jet planes provide a bit of King Kong action, and Alex finishes things off at street level with a well-placed bazooka shot! Somewhere in there a groan-worthy cover of the Pixies’ great song “Where Is My Mind” fits in too, and there’s a jokey look-to-the-skies ending involving some mention of an enormous cockroach! Ha ha!

Well, right off the top I ought to say that the picture is a lot less dire than it might have been! I like big bug pictures, but it’s the old ones I really dig, from Them! right down to Beginning of the End and its ilk! New ones, with their inevitable surfeit of poor digital trick effects, do tend to leave me cold! But though there is just such a surfeit in this picture too, which occasionally annoys, there are a few impressive practical effects also, and so the movie ends up punching just a little bit above its weight!

And even though his character’s constant, desperate quest for a date is a little pathetic, Grunberg’s performance is likeable and intelligent, and that goes a long way in helping the movie! The security guard sidekick is good too, in his limited way, and Wise is always a welcome face! It’s a silly picture, at times a stupid one, very frequently derivative, and never scary or terribly exciting; but like its portly hero it has a good heart, and that goes a long mile with ol’ Burl! It has pep too, which is of critical importance! Ha ha, I don’t mind giving Big Ass Spider! one and a half spinnerets and a blue ribbon for effort!
Posted by Burl at 11:28