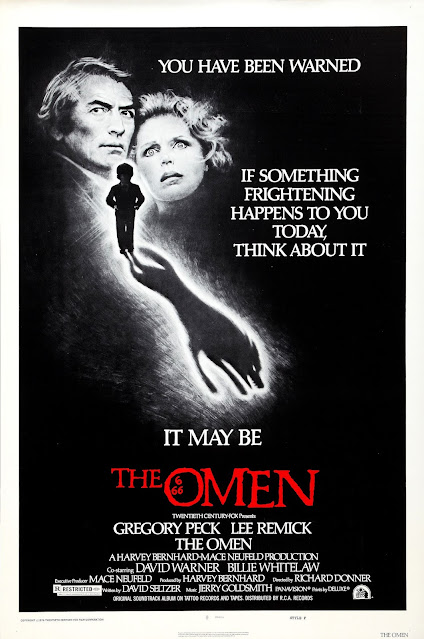 With a devilish boo, it’s Burl, presenting to you a review of one of the big blood and thunder horror pictures of the 1970s! You know this species of movie: usually the title starts with the word The, and frequently the theme is supernatural, often demonic! The Exorcist is the king daddy of these, but pictures as varied as The Car, The Sentinel, The Changeling, The Legacy, and The Pyx might be included as well! And among the most popular of such films is today’s entry, The Omen!

We all know the story! Gregory Peck from The Guns of Navarone plays Robert Thorn, introduced making a fateful decision that he spends the rest of the movie, and the rest of his life for that matter, paying for! Informed that his newborn son has died in childbirth, he is convinced by a hairy priest that he should accept instead another child born at the same time, and never tell his wife, played by Lee Remick from Telefon, about this switcheroo! Of course you and I know who this changeling really is, but it takes quite a while for old Bob Thorn to clue in, ha ha! A number of people try to tell him, and his wife just knows that something is wrong, and of course accidental deaths of varying elaborateness are in store for them all!

Because that’s the real currency of the Omen movies, isn’t it? The central gimmick, that the devil’s child is reborn into a position of privilege that will allow him to ascend to the highest ranks of power in the world, well, we all know first-hand what that’s like, don’t we! But the real audience attraction in the movie is the Rube Goldberg death scenes, of which this picture has only a few, but they were effective enough to indicate the most profitable path for the producers to follow with future installments!

Morgan himself, David Warner from Nightwing and The Island gets the best of them, when a window pane flies off a truck and knocks his melon off! Ha ha! Patrick Troughton from Jason and the Argonauts plays a mumbly priest who tries to tell Thorn what’s going on, but only manages to deliver a little information before he’s transfixed by a church spear! (Ha ha, why is a church participating in these killings, anyway? Logic does not always abound here!) Billie Whitelaw from Night Watch is the sinister nanny, and they have to go all the way to the desert to met Leo McKern from The Day the Earth Caught Fire, in order to learn the method by which Satan’s spawn must be dispatched!

The pictures taken by Warner’s photographer character, in which the subject is overlaid by a sinister shadow indicating how they will later perish, are properly creepy, but they make less and less sense the more you think about them! So does the whole movie, in fact: if the devil can set up these gimmick deaths at any time, then how do any of the characters survive as long as they do? Of course, by the end just about every character has met their doom, so maybe the internal logic is sounder than I think! At any rate, it’s still a solid and effective big-budget thriller, with fine photography from Gil Taylor and a highly motivational score from the great Jerry Goldsmith, and a generally sound craftsmanship in all departments!

It’s silly and manipulative, and often seems more an exercise than a film, but it does the job and delivers what it promises! I can do no less than give The Omen two and a half angry baboons!