Burl reviews Dr. Strangelove Or: How I Learned To Stop Worrying And Love The Bomb! (1964) 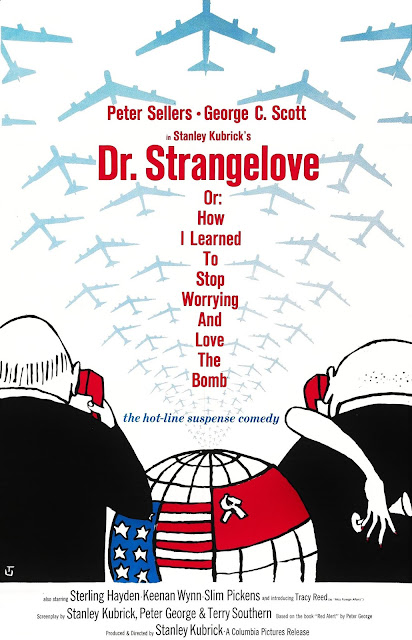 Ha ha, it’s Burl here, living it up on Condition Red! Yes, I’m here to review one of the best movies I can think of, a fine work from Mr. Stanley Kubrick, the maker of pictures like The Shining and Full Metal Jacket! Of course I’m talking about the great Dr. Strangelove, Or: How I Learned To Stop Worrying And Love The Bomb, a movie I’ve seen many times! It’s one of my father’s two favourite motion pictures, the other one being Richard Fleischer’s The Vikings!
Do we all know the plot of this anti-war satire? Ha ha, of course we do: it’s more or less the same as Fail Safe, the movie in which Henry Fonda was inducted as President In Movies For Life! In Kubrick’s movie, it seems that General Jack D. Ripper, played by Sterling Hayden from such marvelous pictures as The Asphalt Jungle and The Long Goodbye, has gone hot bananas and decided to start World War III by sending impossible-to-countermand orders to his in-flight bomber pilots! Ha ha, he’s worried about precious bodily fluids and whatnot, so naturally global decimation is the only solution!
Peter Sellers, whom we know from Down Among the Z Men and Being There, plays three roles in the movie: a visiting British officer stationed at Ripper’s air base, and morally tasked with trying to talk him out of his mad plan; the American president, Merkin Muffley, desperately trying to convince his Soviet counterpart that the nuclear firestorm shortly to ravage his country was not delivered purposefully, or at least not purposefully by him; and of course the good doctor of the title, the cartoonish ex-Nazi Strangelove!
George C. Scott from Exorcist III plays another manic general who indulges in a little fighting in the War Room, and makes the odd comment to his pal Jack Creley from Tulips; and, back at the air base near the end of the picture, Keenan Wynn from Piranha and The Dark and Herbie Rides Again appears as the blockheaded Colonel Bat Guano! In the airplane, our third major location, we find Slim Pickens from This House Possessed and White Line Fever and a young James Earl Jones from The Hunt for Red October! It’s really a pretty incredible cast, ha ha!
And there’s not much else I can say that you folks don’t already know! It’s a precision satire machine that scores strategic hits on an array of targets! It’s a beautifully shot, designed, directed and acted picture that might lean a little heavily on shticky gags here and there, but doesn’t ever stray from its noble, hilarious course! I love the picture and so should you, and I have to give a special mention to Sterling Hayden and his marvelous performance! Ha ha, I give Dr. Strangelove Or: How I Learned To Stop Worrying And Love The Bomb four deviated preverts!