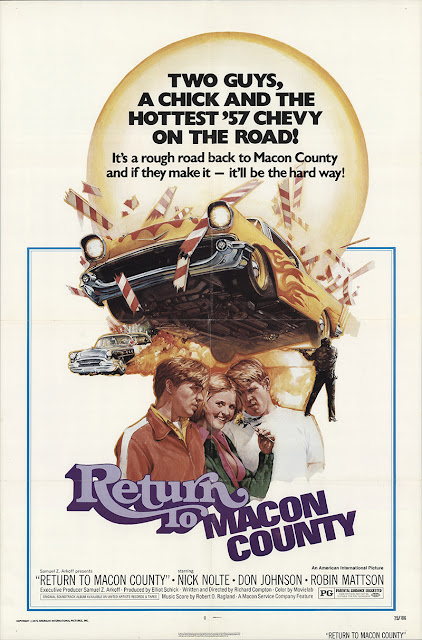 The picture, which is set in the summer of 1958, wastes no time in introducing us to the main characters: a pair of itinerant gearheads traveling to California to become auto racing stars in their self-modified lemon-yellow Chevy! And, ha ha, this duo looks somehow familiar, though younger than we’re familiar with: it’s Nick Nolte from Extreme Prejudice playing Bo, the driver, and Don Johnson from Dead-Bang, as well as novelty appearances in Machete and Django Unchained as Harley, the mechanic!

Clever with autos they may be, but general-issue geniuses these two fellows are not! They stop in Macon County, which is their first mistake, and following this vomes a whole series of subsequent mistakes, big and small! Their principal error is in hooking up with a waitress called Junell, played by Robin Mattson from Candy Stripe Nurses and Phantom of the Paradise, who is cute and cheerful but soon proves also to be completely insane! Ha ha, and she has a gun too, which is not a useful combination!

They soon make enemies: first a greaser gang whom Harley has beaten in a drag race, and who, instead of paying off Harley’s winnings, simply beat him up; and then, after Junell has secured the cash winnings from the gang at gunpoint, they irritate a cop, who instantly goes completely mad himself and declares a blood vengeance on the lads! Thanks to a scary performance by TV actor Robert Vilarho, the cop seems a formidable antagonist, even if his dogged pursuit of Bo and Harley fails to make much sense!

Junell pulls her gun a few more times, which gets them all into even more trouble, and soon she’s babbling about rabbits flattened on the highway being scraped up and used as Frisbees! Ha ha, this is recalled and used as some sort of metaphor in the film’s final scene, but that, too, doesn’t make a whole lot of sense! Neither does Bo’s troubled infatuation with Junell, though the punchfight between the friends, once they realize the depth of the trouble they’re in, certainly does make sense! Each of these dopes deserves a walloping, with the other being just the man to deliver it!

One expects a full and drama-filled breakdown from Junell before the end of the picture, and perhaps a climactic institutionalization, but that seeming inevitability never happens! Instead we get a fatal case of mistaken identity between the vengeance-crazed cop and the nasty greasers, followed by the complete psychotic dislocation of the lawman! Ha ha!

Return to Macon County was part of a rich tapestry of low-budget cornpone action dramas in the 70s: stuff like Redneck County and Eat My Dust and Smokey Bites the Dust, and so many more! I guess these things played well on the drive-in circuit, ha ha! With its stars-to-be and its willingness to go dark, it stands out slightly from the crowd; but like so many of its brethren, it frequently threatens to get dull! That it never quite follows through on this may be more a function of my own mood when watching it than the movie’s own innate pep, but it can’t be denied that the picture is competently made by writer-director Richard Compton, whose work I’m otherwise unfamiliar with!

I suppose one of these days I ought to see the original Macon Count Line, which was auteured by Jethro his own self, but I guess I’m in no real hurry! Meantime I’m going to give Return to Macon County two exploding gumball machines!
Posted by Burl at 13:47