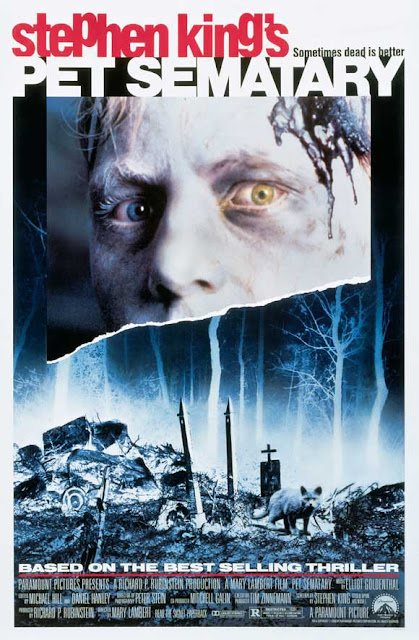 Ha ha and housecats, it’s Burl! Yes, I thought I’d review the first filmed version of Stephen King’s book Pet Sematary, which, as I recall, I saw at the theatre on a date with my first real girlfriend, Ingra! I don’t think Ingra liked it very much, as she was not what you would call a horror movie aficionado! She did turn me on to all sorts of great books though, so I have plenty to thank her for! And we also once checked into a motel under the names “Mr. and Mrs. Buster Hideaway,” and you can say what you like about this younger generation, but I don’t think the kids are doing that sort of thing any more! Ha ha! And I suppose motel clerks are more scrupulous about checking identifications than they used to be!

But on to the movie! Now, I thought it was a pretty good idea to hire Mary Lambert to direct it, even though it was originally supposed to be George A. Romero at the helm! I don’t know why Romero bowed out, or was taken off it, or what happened, but it seemed like a lady director (sadly novel in those days, and less so now but not by all that much) who’d done Madonna videos and the art-crime picture Siesta would be a pretty bold choice! But you know, though she did a perfectly adequate job, there was nothing special about her approach so far as I could tell!

Dale Midkiff from Nightmare Weekend plays a carved wooden figure representing Louis Creed, the dad who works as a university doctor! Denise Crosby from Miracle Mile, looking comely in a pinched sort of a way, is the mom; and of course there are two sweet kids: preadolescent Ellie and the charming toddler Gage, who is played by Miko Hughes from Apollo 13 and Wes Craven’s New Nightmare! Because they have kids and a housecat too, the parents know the best thing to do would be to move into a house on a road down which massive tanker trucks hurtle constantly like screaming engines of death! Ha ha, the perfect place to raise a family!

Across this road of sorrow lives the elderly neighbor, Jud, played delightfully by Fred Gwynne from The Secret of My Success! Gwynne’s performance is a real high point in the picture, with his delightful Mainer accent and old-duck mannerisms and just plain Gwynne-ness! Of course we know where the story goes from here: Jud tells his new pal Louis all about the secret cemetery back yonder, the one that has the power to resuscitate the dead! Tragedy strikes soon after, and the use of the baneful graveyard brings about a lot more death and despair to the family Creed!

Brad Greenquist from The Bedroom Window and The Chair plays the world’s least-helpful ghost, who manifests in the form of a walking meatloaf much like Jack from An American Werewolf in London, but without the comradeliness! He’s clearly just there to add some affrights, or at least some goriness, to the proceedings while the main story unfolds at the pace and in the progression that it must!

The King book is one of his most emotionally resonant, but the movie comes nowhere close to replicating this! Part of the fault lies with Midkiff, who, I’m sorry to say, just isn’t a very good actor; another part with King himself, who wrote the screenplay! The whole movie seems to have gone through a studio scrubbing process, which I suppose accounts for the blunted edges of Lambert’s style! It’s got a inappropriately-bright 80s look and some goofy optical effects, and so the atmosphere so badly required by this tale is largely, though not entirely, absent!

It all hoves a bit to the mediocre side, and the remake, which I also watched recently, doesn’t improve things much! I’d like to see what Romero might have done with the story, maybe using a script written by someone with more distance from the material, but I guess we’ll never know how that might have turned out! I’m gong to give this iteration of Pet Sematary two frozen cats, and at least half of that, I’ll admit, is for Fred Gwynne! Ha ha!
Posted by Burl at 08:18