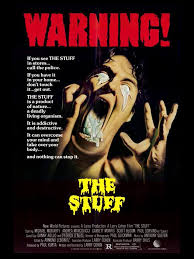 Glip glap glorp, it’s Burl, here with a dessert recipe for you courtesy of Mr. Larry Cohen! Ha ha, move that light! Yes, as you probably already know, I’m fond of Larry Cohen and his pictures, even though many of them aren’t very good, and this one in particular is, well, flawed! But as with all of his movies, however technically inept the may occasionally be, or how unformed the narrative, there are compensations both conceptual and performative, and frankly this picture, The Stuff, needs all the compensations it can get!

The idea can hardly be beat, ha ha! We open in an industrial setting, where a worker espies a strange creamy substance bubbling from the ground! Of course his first instinct is to take a big fingerful of this goop and jam it in his mouth, and, finding it delicious, take it to market as The Stuff!

Before you know it The Stuff is the newest taste sensation, replacing ice cream, whipped cream, icing, or any other sweet paste! The establishment confectionary companies aren’t any too pleased about this, and they hire an eccentric industrial espionage agent, Mo Rutherford, so-called, he frequently explains, because whenever he gets something, like money, he always would like some mo of it! Equally unhappy with The Stuff is a little Long Island boy who sees it move in his fridge, and the advertising lady who came up with the dynamite campaign for the uncanny treat once she learns (and easily accepts) the truth about it - namely, that it’s a sentient slime which will hex the eater’s brain and, eventually, grotesquely rupture his body!

So there you go, ha ha, primo material for horror, action, weird trick makeup effects, and social satire; and all of this The Stuff has, but in very budget amounts! Of course this is fair because it was a very budget production, though it must be said here and now that there are some excellent trick effects in it and some obvious but amusing old fashioned techniques on view, like the old spinning set routine or the forced perspective shots! These things give the picture a pleasantly old-fashioned feel!

Cohen was always good at putting together marvelous New York casts, and he does again here! Michael Moriarty, who, believe the hype, is very good in Q, is Mo; Andrea Marcovicci from The Hand is the advertising lady, Nicole; and then Garrett Morris from Motorama (but who isn’t from Motorama, ha ha!) shows up playing an excitable cookie magnate who suffers a wide-mouth demise that looked a lot better in the pages of Fangoria than it does in the movie! Near the end, when Paul Sorvino turns up as a right-wing cock-a-doodle-doo, we get some satirizing of the demented-patriot mindset, as though satirizing American consumerism and diet were not enough for one picture!

I guess the slapdash way Cohen put this together got under my skin a little, ha ha, because I believe he knew perfectly well how to make coherent movies, but so often he just didn’t bother! We find this syndrome in God Told Me To, in which it sort of works because the material is so weird, and in A Return to Salem’s Lot, where it doesn’t so much; but it especially seems the case here! There are explanatory factors: for one, the ambition and the budget didn’t exactly match up, and I understand there was post-production monkeying from the distribution company!

Of course the blame for the movie’s many flaws - the inconsistent acting, the confounding mise-en-scene, the chicken-with-its-head-cut-off storytelling, the whole impossible tanker-truck scene - rests with Cohen, but then so do the virtues! The killer dessert angle is marvelous; there are funny bits throughout; and the supporting cast, including Patrick O’Neal from Silent Night, Bloody Night and The Stepford Wives, Danny Aiello from Radio Days and The Protector, Rutanya Alda from Amityville II: The Possession and Black Widow, and, in cameos, Brooke Adams from The Dead Zone and (appropriately) Invasion of the Body Snatchers, Laurene Landon from Armed Response and Maniac Cop, Abe Vigoda from Death Car on the Freeway, and even Clara Peller from Moving Violations, is truly unique!

I guess whether you like The Stuff or not rests largely on whether you like Cohen and his crazy movies or not! I’m highly sympathetic to them, and him - I was sad when he died, prematurely it seemed to me! - and I also have some pleasant teenage memories connected with the movie! I’m going to give The Stuff two big spoonfuls!