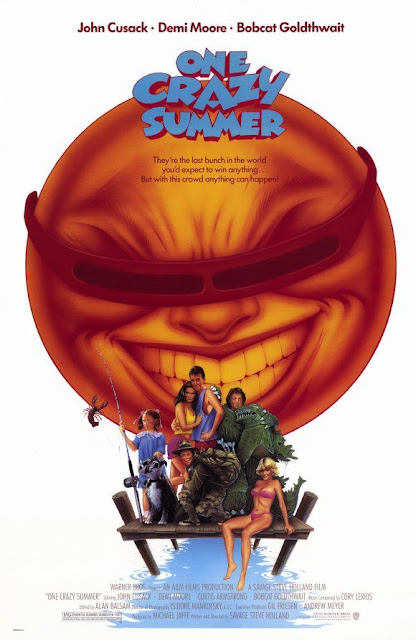 Hello gumchewers, and all the best of the summer to you! Today I thought I’d review an airy little goofnut from thirty-five summers past! It’s a picture I saw on video with my pals a-way back when, and we probably watched it because we were fans of the director-star combo’s previous work, Better Off Dead! This picture runs a distinct second place to that minor 80s comedy gem, and it goes by the name of One Crazy Summer!

The director in question is Savage Steve Holland, who, like Tim Burton, came from the world of animation and so liked to include little bits of cartoon or stop motion in his live-action features! The star of the picture is John Cusack from Tapeheads and Con Air, but in reality he’s only the star because he was the most high-profile performer when this was made; in fact, despite being the audience-identification character, he’s more a part of an ensemble! Inasmuch as he has an identity at all, the character is defined as a high school graduate known inexplicably as Hoops, whose fondest hope is to find romance and be admitted to a college of the fine arts!

His pal Sweet Calamari, played by one of Bill Murray’s brothers (but not, I think, the one who was in Moving Violations), ushers him to Nantucket Island for the summer! On the way there they encounter struggling songstress Cassandra, played by Demi Moore from Parasite, who is on the run from a motorcycle gang headed by the guy from Goonies! That particular back story is one that remains unexplored, ha ha, as do many others, but this is not a drum-tight narrative we’re dealing with here!

On Nantucket, numerous other personages emerge! There are the Stork brothers, Egg and Clay, played by Bobcat Goldthwait and Tom Villard respectively; and then we have perhaps the most appealing character in the picture, the peace-loving Ack Ack, essayed by Curtis Armstrong, whose father is a warmongering general played by Joe Flaherty from Club Paradise! There are of course bad guys: a family of developers called the Beckersteds, whose goal is to take over a house which Cassandra has inherited and replace it with a soulless condo complex! These nogoodniks are frat bro Teddy, played by Matt Mulhern from Extreme Prejudice and Junior; a dad played by one of the jerk bros from Animal House; and there are sidekicks essayed by the likes of Jeremy Piven from Edge of Tomorrow! Old William Hickey, from Tales From the Darkside: The Movie and suchlike, is the wheelchair-bound but non-evil patriarch of the clan!

All these elements come together in the most obvious and primitive of ways: Hoops falls for Cassandra and he and his band of weirdos must triumph over the Beckersteds, and, as in another summer picture from the era, Summer Rental, it all comes down to a regatta, for which the heroes must employ a watercraft previously considered thoroughly unseaworthy!

It’s all very uncomplicated but good-natured, and the pleasures, when they come, come not from the main plot or cast, but from the material on the margins, which are supplied with gags as though Sergio Aragones had a hand in the script! That would be fine if the gags were funnier, but the laffs, unfortunately, are rather sporadic! The movie’s not without charm though, and it also contains weirdness, and these two qualities are valuable indeed! Bobcat Goldthwait goes so far into his usual 80s persona that he seems deranged, but his performance doesn’t grate the way you might expect, or at least not as consistently as you might expect! Ha ha! There’s a bright and sunny summer atmosphere, and the seaside charm of the Nantucket location occasionally shows through, and of course there are plenty of Jaws references! Though it’s no classic, and not even close, I found my recent re-viewing of this picture enjoyable, and so I give One Crazy Summer two man-eating dolphins!