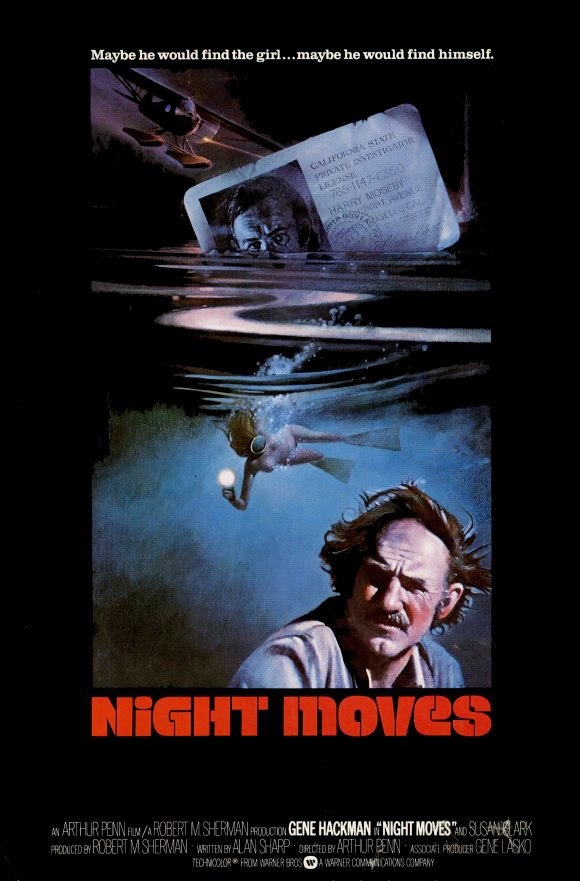 Workin on a' night moves, dum dum dum, working on a' crazy downtown moves… it’s Burl! Ha ha, yes, I’m here to review one of my very favourite 1970s private eye pictures! 70s private eye pictures can be pretty marvelous – witness The Long Goodbye, Chinatown and The Late Show, ha ha – but the one I’m going to review today is Night Moves!
Now this is a real pistol-packer if you ask me! There’s a lot going on in the picture, and not all of it is clear, but the easy-but-effective visual metaphor in the movie’s closing shot assures us that if we don’t quite understand what we’ve just seen, well, neither does the protagonist!
The protagonist in this case—ha ha, “case!”—is Harry Moseby, who once was a championship football player before becoming a private eye, and is played with perfection by Gene Hackman from The Quick and the Dead! He’s one of your small-office dicks, the fellows who do the seedy, sniffing-around kind of work! Like all movie private eyes, he quietly revels in his status as anachronism! But his lady wife, played by Susan Clark from Porky’s, is not faithful to him (her unlikely boyfriend is the judge from Ghostbusters II!), and as a result he immerses himself in his current missing-persons case rather more profoundly than he should!
He’s looking for a peppy teenage girl, the daughter of a Hollywood semi-starlet, and the trail takes him first to a movie set and thence to Florida, where it’s all going down! There he meets Jennifer Warren from Mutant, a glib and sassy blond with a gift for badinage; and a salty fellow who is the missing girl’s stepdad; and then the missing girl herself, played by a sixteen year-old Melanie “Fear City” Griffith!
From there things get complicated and opaque, and people are killed, and the mystery that Hackman thinks he’s uncovering is never quite where his focus should actually be! The plot is in the end not so much impenetrable as open to interpretation!
To me the big clue Harry misses is that everybody he talks to seems to know everyone else he wants to talk to, and that the connections are never hidden, but still remain murky! Harry himself is easily able to ingratiate himself with all these people, due to his charm and his football celebrity, but he should be suspicious of their instant affability! “Knowing people” is really the dominant theme in this picture, as the other thread of plot involves Harry and his wife, who’ve been married for years but still don’t really know one another!
The movie works many wonders, and one of them is that it feels blessedly like one of those quietly marvelous, low-incident character studies the 70s filmmakers were so good at, while at the same time containing fistfights, nudity and plane crashes galore!
The picture looks good, having been nicely photographed by Bruce “Out of Bounds” Surtees; and Arthur Penn does a commendable job directing it! You know, Penn made plenty of great pictures, but this might be my favourite! Ha ha, I certainly prefer it to Target! The script by Alan Sharp (who also, believe it or not, helped with the script of Damnation Alley!) is just that, sharp, and the supporting cast includes many fine performers, from James “Videodrome” Woods to Kenneth “For Keeps?” Mars, to even Rags himself, Max Gail from Curse of the Black Widow!
It’s a movie both shaggy and sharp, and maybe that’s one of its great accomplishments too! (And one it shares with The Long Goodbye!) I think you ought to have a look at this fine movie if you haven’t already seen it! I’m going to give Night Moves four bonks with a conch, ha ha!
Posted by Burl at 08:09