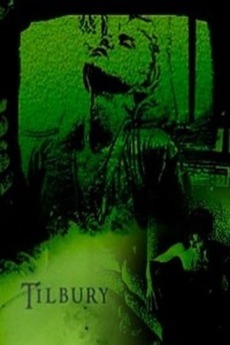 Hèi hèi, it’s Bürl, here to review some Icelandic cinema! Actually this may have been more of a TV movie, ha ha, but I’m not completely certain! If it was, then Icelandic TV was more permissive than the North American variety, because this picture contains a little bit of nudity, some bloody violence, and some salty language! It also contains a strange mythology, but then what Icelandic tale does not! The picture tells the tale of a tilburi, and it’s called Tilbury!

Now, as I mentioned, there are plenty of odd tales in Icelandic mythology - ha ha, I myself have written a film treatment concerning the strange saga of the Necro-Pants, and I hope one day that one can be committed to film! This particular myth holds that a woman who wants more butter in her life can conjure up an imp called a tilburi, which requires that she hold a rib bone wrapped in wool between her breasts and douse it in communion wine, along with some other witchy acts! Then the goblin will appear and steal the milk from livestock at neighbouring farms, and when it returns will spit out a hideous green butter “of unusual consistency,” according to the movie’s opening narration! Then of course it desires to suck blood from a teat which grows out of the woman’s thigh!

That’s the myth in its broadest strokes, though what’s missing is an explanation of why anyone would want butter that badly! Perhaps I’m not properly appreciating the level of privation on Icelandic farms, but surely there must be more desirable commodities than butter! At any rate, the story is set at the opening of the war, in the spring and summer of 1940, when the little island nation is overrun by British soldiers on the lookout for Germans! A goonybird pastor’s son called Audun, who scarfs down dairy products as quickly as his slavering jaws can consume them, goes to Reykjavík in search of a bigger swimming pool in which to practice his distinctive leaping stroke, and also is asked to keep an eye on Gudrún, a young lady from the town whose father is worried about her in the free-living environs of the capitol!

And so he should be, because Gudrún has conjured a tilburi! He takes the form of Major Tilbury, a big-nosed British officer, who rides around in a sidecar and distributes Cadbury chocolate to the children! Ha ha! From there the tale darkens considerably, as everyone dances to the “Let’s All Go To The Lobby” intermission song and Major Tilbury begins to show off his butter-redistribution skills as well as his Freddy Krueger fingernails!

At times the picture seems like one of the early gentle comedies of Bill Forsyth, at others more like a piece of filmed experimental theatre a la Futz! At still other moments it’s downright horrific; in fact this hour-long TV drama manages more affrights in its scant running time than the entire Friday the 13th film series! It makes plain the otherness of the creature, and its seperateness from the Icelandic population, by equating it with the British and American soldiers who have overwhelmed the country; and the more so by making the tilburi an officer rather than an enlisted man! By the end an American Tilbury has showed up, and he distributes Hershey chocolate instead of Cadbury!

I enjoyed this curious photoplay, and I recommend it to all! It’s not a lavish piece of cinema, but it’s a highly effective one, and has that great Icelandic sense of humour without diluting any of the scariness! I give Tilbury three basement Nazis!