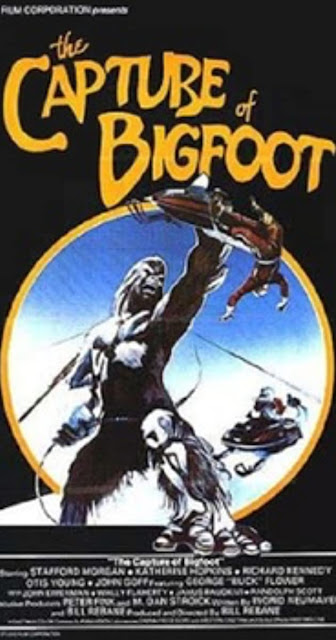 Fellow Rebaniacs, ho! It’s Burl here to review one of the Wisconsin auteur’s more polished works! Ha ha, do you know who I’m talking about? Can you name any famous filmmakers from Wisconsin? Well sure, there’s Orson Welles, but today I’m talking about Bill Rebane, who came from Latvia and settled in the snowy wastes of the Upper Midwest, and was never shy about showing off the area in all its wintery goodness in his films! And he does so in spades with this picture, The Capture of Bigfoot!

Like Invasion From Inner Earth, The Demons of Ludlow, and several other Rebane movies, this one was shot in the dead of winter with the actors all wearing parkas, issuing plumes of steam with every exhale, and crunching through calf-deep snow! I don’t know why Rebane made so many of his movies in the winter, because it’s really hard to do - believe me, I know! Ha ha, I saw somebody go crazy on a winter night shoot once, just fall down on the ground and run in circles jabbering in tongues like Homer Simpson! I suppose Rebane just likes the look, or perhaps that was simply when people were available!

Anyway, The Capture of Bigfoot is a very snowy picture, and frankly a very enjoyable one as well! First of all it’s a Bigfoot movie, and you know how I like those! Ha ha, I made one myself once! Also, it’s got some pretty good small-town atmosphere and some moments of uproariousness, as when the bad guy, in response to a sasquatch-related setback, punches one of his henchmen right out of a window! You have to see it to properly appreciate it, ha ha! There’s also a terrific dance club scene with some truly wonderfully awful songs and a fire crackling merrily in the hearth! Snowbeast, for all its virtues, would have benefited from such a scene!

It takes quite a while to get to the titular capture, and while some viewers may consider self-administering a dose of strychnine as they wait, they would be wrong to do so! Getting there is half the fun in a Rebane movie, after all! Here we have a town made up of woodsmen in earflap hats, swingin' young folk, humdrum cops, and greedy businessmen, or at least one greedy businessman, who through the course of the narrative is driven mad by his own ambition! Ha ha!

It all begins with some loutish trappers who’ve caught a strange creature and have it in a box on their dogsled! But a big tall snowsquatch pops out of the bushes and tosses these fellows around like rag dolls in an SCTV skit, and it turns out that the creature in the box is a teenage bigfoot with a kindly-old-man face! The local robber baron conceives of a plan: recapture the cryptids, put them on display, and make bank! Ha ha, it’s a misguided scheme as old as Carl Denham, and of course it ends with explosions!

There are a few more recognizable faces than we usually see in a Rebane project! Stafford Morgan, who later appeared in Die Hard 2, plays the local lawman who ends up freeing the captured Bigfoot from the cave cage he's been put in! Richard Kennedy from Holy Wednesday essays the role of nasty Mr. Olsen, who just gets meaner as the picture goes on! Otis Young from Blood Beach and John Goff from The Fog, Alligator, and The Candy Tangerine Man are Olsen’s hapless henchmen, Jason and Burt! And of course the great George “Buck” Flower, well known from pictures like Teen Lust, Cheerleader Camp, and Pumpkinhead, is a sympathetic local oaf! As with so many regional genre pictures, the cast here skews to the older side, and while they’re not quite as elderly as we find in, say, Bog, they’re up there!

It moves at its own pace and to its own logic, but I enjoyed the picture! Maybe it helped that I watched it most recently just a few days ago out in the snowy winter wilderness, in an actual cabin in the woods with the dim outlines of snow-fringed pines receding into a dusky enfilade! Bigfoot might have peeked in the window at any moment, ha ha! But if you’re a Rebaniac, and I assume you are, you’ll enjoy the thing to some degree wherever you watch it! I give The Capture of Bigfoot two red jumpsuits!
Posted by Burl at 09:41