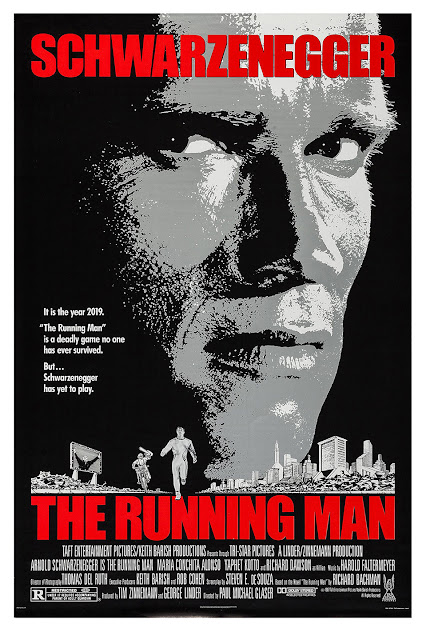 Ha ha, I told you I’d be back! And so I am, with another 80s Arnie extravaganza! I remember that I saw this in the theatre on my seventeenth birthday, and went from there around the corner to the local punk bar to see the marvelous band NoMeansNo play and sing their goodtime rock and roll music! I bought a copy of their wonderful album Wrong on that snowy November night, so to this day I feel a strange association between that watershed of heavy punk music and the movie under review, which is The Running Man!

Arnold, whom we know so well from Conan the Barbarian and Raw Deal, stars as a fellow sporting the traditional Austrian name Ben Richards! He’s a police helicopter pilot in a dystopian, game show-loving future who balks when asked to slaughter hundreds of people protesting a lack of available comestibles! Next thing you know he’s in prison, framed for the crime of slaughtering a hungry crowd, and he’s teamed up with Yaphet Kotto from Truck Turner and Marvin J. McIntyre from Fandango to escape the future jail, where if you cross a certain line at the wrong time, your head will explode like one of those watermelons David Letterman used to toss off a five story tower!

After hijacking Maria Conchita Alonso (whom we recall from Fear City and Extreme Prejudice) in more or less the same way he did Rae Dawn Chong in Commando, Arnie is netted by police and recruited by evil game show impresario Richard Dawson to guest star on his program The Running Man! In this telecast, hapless contestants run from a series of “stalkers,” played by the likes of Erland Van Lidth De Jeude from Alone in the Dark, Jim Brown from The Slams, Gus Rethwisch from The Concorde… Airport ’79 and Professor Toru Tanaka from Darkman! Ha ha, there are a lot of big men in this movie, and plus there’s ginormous Sven-Ole Thorson from Nowhere to Run, and Jesse “The Body” Ventura from Predator!

Mick Fleetwood and Dweezil Zappa, both of whom look thin as feathers compared to their bulky co-stars, play some underground resistance fellows with whom Arnie hooks up after he’s battled all the novelty warriors! Ha ha, these battle scenes are fairly perfunctory, and Arnie seems to pause and deliver at least two catch phrases for each victory! “Here is Subzero, now plain zero!” is at once the most famous and the least sensical of them! The climax, too, is pretty shoddy, with a little bit of running around and some machine guns going off, yawn; but at least there's a satisfying disposal of the villain!

The picture was directed by Starsky himself, Paul Michael Glaser, whom we know from his starring appearance in Phobia, and he tries to apply some of that Miami Vice gloss to the movie, but it never really sticks! He’s not the most accomplished action director either, and the fighting and chasing and car crashes are never as exciting as they ought to be! Only the tube cars which convey the contestants down to the boring wasteland in which they compete manage to stick in the memory!

It’s not all bad! Arnie is on autopilot most of the time, but manages a few good lines! Richard Dawson is very convincing as the nasty gamesman, so much so that I now look at old episodes of Family Feud slightly askance, ha ha! The cast altogether is a little weird, that’s for sure, which is all to the good; but imagine what it could have been like with real imagination behind the camera, giving us stuff more along the line of the Thunderdome scenes in the third Mad Max picture! Kinetic and bizarre and thrilling, more punk rock and less dancing: those would all have been good choices to make for this film, but few of these values are found! It’s a film of some vaguely approached but in the end entirely squandered potential, and I give The Running Man one and a half neck bombs!

Email ThisBlogThis!Share to TwitterShare to FacebookShare to Pinterest
Labels: 1980s, action, saw it on the big screen, Schwarzenegger, sci-fi