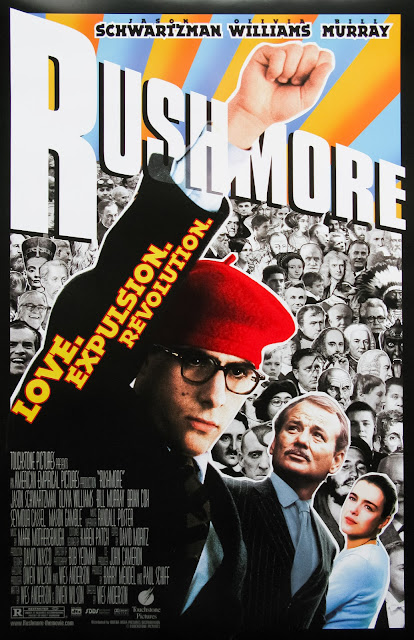 Sweet school greetings, it’s Burl, here to review a marvelous little picture! It’s an early work from the dapper fellow who brought us such equally dapper pictures as The Life Aquatic with Steve Zissou and The Grand Budapest Hotel and Moonrise Kingdom! But this is a smaller-scale work than any of those, and probably I’m fonder of it than I am of the bigger pictures! Ha ha, the movie in question is Rushmore!

I saw this picture on a date, as I recall, and it was the single and only date I went on with this particular lady, as it turned out! But that wasn’t the movie’s fault, since we both enjoyed it heartily! In fact it was no one’s fault - ha ha, it was just one of those things, and for the best too, as right after that each of us started going out with the person we would end up marrying! So I guess Rushmore has the important distinction of being the last movie date I was on with a person not my wife! Ha ha!

And so to the movie itself! We’re all familiar with these Wes Anderson pictures by now, and I for enjoy them quite a lot, though not everybody does! Back when Rushmore came out his style was still very fresh, and had not yet been dismissed as overstyled, mannered, or twee! Moreover he was able to show Bill Murray, still best known at that time as part of the famous team of Ghostbusters, in a new comedeo-dramatic light, and that’s an achievement worthy of some good will!

Rushmore tells the tale of Max Fischer, an ambitious overachiever and academic underperformer at Rushmore Academy, who battles for the affections of a comely teacher played by Olivia Williams from Maps to the Stars! Max, played by a young Jason Schwartzman, who would later appear in such pictures as CQ and Scott Pilgrim Vs. the World, can be an annoyingly obsessive twerp, a condescending jerk, and a monstrously self-centered diapersman, but he’s not a bad sort in the end, ha ha - just a teenager!

Olivia Williams from Maps to the Stars plays the pretty teacher on whom Max sets his cap, and Seymour Cassel, well-known for his roles in Eye of the Tiger, Best Seller, and any number of John Cassavetes pictures, plays his barbershop dad, who delivers his gemstone dialogue in a totally endearing deadpan! Brian Cox from The Ring is the Rushmore Academy principal, and Mason Gamble from Bad Moon gives one of the all-time great kid performances as Max’s little buddy! The waxing and waning of Max’s relationships with all these characters provides the dramatic impetus for the picture, and the comedy comes from all the details packed in like M&Ms all around!

I like the weird behavior that no one remarks upon, like the depressed industrialist and precocious teenager who easily and naturally become best pals, and later romantic rivals! I like the escalating prank war Schwartzman and Murray engage in! Ha ha, I like the little kid who makes the picture of the jellyfish! I like Mr. Littlejeans and the way he steps back as Bill Murray’s out-of-control car rolls toward him! I like Max’s plays and that nobody associated with the production cared how impossible they would be for high schoolers to stage!

The story takes place from September through January, which we know thanks to some little curtain cards, and I like those too! The songs used on the soundtrack are well-chosen, and though this picture, as most Wes Anderson pictures, leans a little heavily on them, borrowing what emotion it can from them rather blatantly, it’s heard to take issue with that because the songs are so good! All in all, it would be fair to say I like this picture and don’t mind the heavily-ladled artifice! Ha ha, I give Rushmore three and a half handjobs by the pool!

Email ThisBlogThis!Share to TwitterShare to FacebookShare to Pinterest
Labels: 1990s, comedy, coming of age, drama, kids, saw it on a date, saw it on the big screen, school