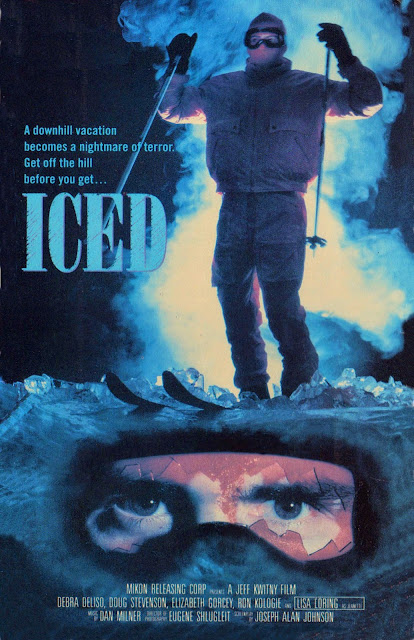 Schuss schuss, it’s Burl, here on the slopes to review a tale of downhill slashing! Of course there are earlier examples of ski lodge horror, most notably Snowbeast, but this picture, Iced, is probably the first time a slasher got to work on the hard pack!

Like many slashers, this one starts with the Traumatic Inciting Incident From Several Years Before! We find ourselves in the midst of a group of ski-happy puffhairs having lifestyle fun at the winter resort! But there’s a conflict, and the tightly-wound Jeff, who suffers first a romantic setback and then a humiliation on the slopes, complains to an unseen person that his so-called pals appear to be questioning his integrity as a skier! Jeff then goes for a nighttime rip and ends up plummeting chest-first onto a rock!

Five years later the surviving friends all get mysterious invitations to a free vacation at Snow Peak, a new and unimaginatively-named mountaintop resort! But the weekend goes decidedly off-piste when a mysterious figure in a powder-blue snowsuit and cracked goggles gets out the old carving ski and goes to work! Although "goes to work" is not quite accurate, ha ha! The killer flattens one of the pals with a snowplow before the unlucky victim has a chance to even arrive at the resort, much less unpack, but after that the maniac waits a very long time to resume his killing spree!

This time is filled with the kind of late-80s horror-soap drama familiar to anyone who’s seen Bloodmoon! The histrionics are enacted by actors of varying levels of talent, several of whom should have known what was coming, as they've had trouble with slashers before! Trina, played by Debra De Liso from The Slumber Party Massacre, is the main lady here, and her husband Cory is Doug Stevenson from The Prowler! Wednesday Addams herself, Lisa Loring from Blood Frenzy, is the resident hot tamale, and Joseph Alan Johnson from Berserker and Hollywood Hot Tubs, who also wrote the script for this confunction, is the guy trying-but-not-trying to sell time shares of the ski resort cabin! And there’s an ill-fated couple played by John C. Cooke from The Puppet Masters and Elizabeth Gorcey from Footloose, Grandview U.S.A. and Teen Wolf!

On paper, the picture delivers the goods one expects from a slasher, with several scenes of both real and imagined bohankie, and a few Special Makeup Effects sprinkled here and there! Ha ha, the ski pole through the neck and the icicle in the eye are highlights (and in this latter effect, the movie beats Renny Harlin to the punch, as his use of icicles as murder weapons in Die Hard 2 and Cliffhanger came only later!), and the luring of the rattail-sporting drugs fiend into a garden of bear traps has a certain grisly impact! But for all this it’s not terribly memorable - there’s precious little pep in the filmmaking, and the characters are by and large intolerable!

For a ski resort picture there’s not much skiing, which is fine, and the lodge itself is strangely anodyne! This atmosphere extends to nearly the whole picture, with a few small exceptions! The climax has the main lady running around in a ski jacket, however no pants; and the post-climax codicil is a delightful burst of absurdity involving a snowman! Ha ha! Most of the picture is pretty tiresome though, with a full load of melodrama to endure and not much vim to leaven it! The mystery aspect is underdone as well! It’s all very late-80s, and that will be a draw for some I suppose; and with that in mind I give Iced one Rockadiles shirt!