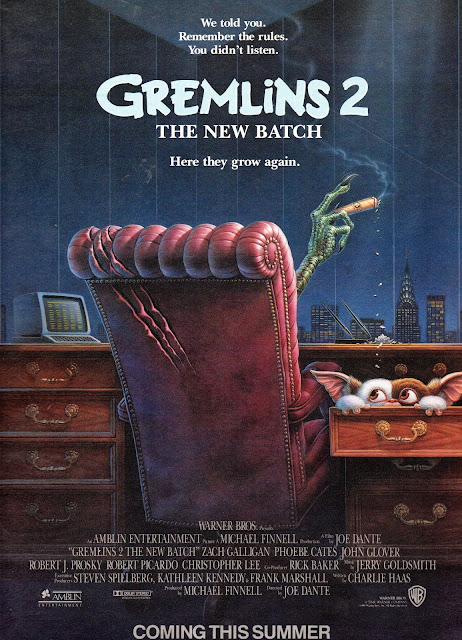 Hello, Burl here to consider a sequel! Ha ha, and Gremlins 2 is a little bit special among sequels – many consider it superior to the original, which I’m not sure if I do; but you can’t argue that it’s not quite a bit different! The story goes that Joe Dante – director of Explorers, Piranha and Matinee, ha ha – was given carte blanche on this one simply because the studio wanted a sequel to the original hit so badly! He was able to do just about what he wanted, and what he wanted was to make a live-action Chuck Jones cartoon! Ha ha, so he did, and this is probably more faithful to the Jones spirit than even Dante’s own Looney Tunes: Back in Action!
I didn’t bother going to see this one in the theatres, though I should have! I was pinching my pennies that summer as I recall, saving them for everything from Total Recall to Last Exit to Brooklyn to Frankenhooker to The Cook, the Thief, His Wife and Her Lover to Jan Svankmeyer’s Alice, to Mo' Better Blues, and to Alan Rudolph’s Love At Large for some reason! So Gremlins 2 got the old cold shoulder, and I didn’t see it until many years later, even though I was and remain a big Joe Dante fan and an even bigger Dick “Lies” Miller fan!
“Ha ha, Dick "Lies" Miller?” I hear you say! “Weren’t Mr. Futterman and his wife killed by gremlins in the first one?” The answer is no, apparently not! Dick Miller and Jackie Joseph (who also played husband and wife in Get Crazy, remember!) show up in New York to visit Zach Galligan and Phoebe “Private School” Cates and their little pal Gizmo! Both of the youngsters now work in the Clamp Tower, owned by the Trump-like airhead Daniel Clamp! Ha ha, and the next thing you know, gremlins have taken over the building, causing cartoon havoc throughout!
Ha ha, the great thing is that Miller really takes a hand in battling the little beasts this time around! He gets to be heroic and rescue Zach Galligan – ostensibly the hero, but actually offloading all heroics to Miller, Daniel Clamp, Phoebe Cates and Gizmo, along with several other supporting characters – and fights a gremlin on the streets of New York! He’s the only one who gets to do this, as all the other action is situated within the building itself, making this yet another movie about being trapped in a high rise!
It’s got plenty of gags, many of them pretty sharp (and I’ve always been partial to the line “It’s like I’ve always said: if you want to find something weird, you have to go downtown!”), ha ha, but the general silliness of everything means you don’t care much about what’s going on! That’s one thing the original has over this one – it was grounded in some form of recognizable reality, which I realize is an odd thing to say about a manifestly backlot-bound picture about little transforming creatures, ha ha! But whatever endemic goofiness Gremlins had, the sequel has in triple spades!
The great thing here is the cast! Of course we have Dick Miller, and almost as inevitably we find the underrated Robert Picardo, here playing another officious brambleberry, like in Matinee but worse! And then there’s John Glover, who’s fantastic in the Daniel Clamp role! Beyond that we have Robert Prosky, the garage owner from Christine, as a melancholy Al Lewis figure, the great Christopher "Starship Invasions" Lee essaying the role of a genetics scientist, and a gorgeous redhead whose name I’m ashamed to say I’ve forgotten! Ha ha, this building has everything!
It’s a big, professional production, with plenty of that great Joe Dante pep! Ha ha, pep in general is not lacking here! Neither is Dick Miller, I’m pleased to report! It’s a garden of pleasures, but also kind of an unmovie – like a book of gags or point-form lists is to an actual story! There’s still plenty to enjoy though, and just the fact that such an oddball studio movie exists at all is a point in its favour! I’ll give Gremlins 2 two and a half portly twins!
Posted by Burl at 21:44