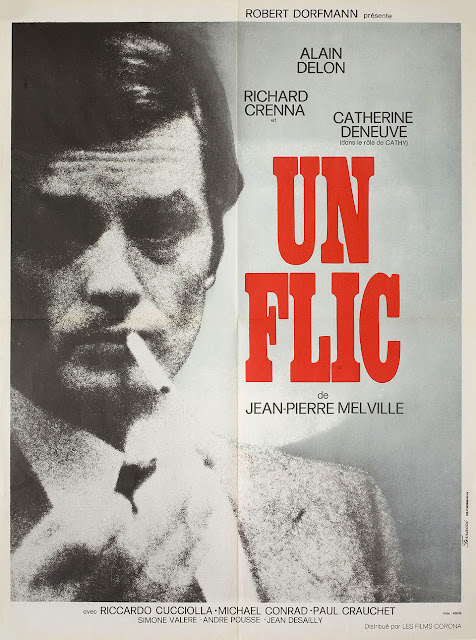 Eh bonjour, est bonne année, c’est Burl! Today I have a review of the last feature made by the great Jean-Pierre Melville! Now, he’s best known for his crime pictures, of course, but he worked in other genres too, like the French Resistance genre! But this picture, Un Flic, or, in English, A Cop, is most certainly a crime picture! Ha ha, with a dirty street Santa popping up at one point, it’s also in part a holiday picture!

But it’s a slightly oddball one! For starters, although the movie is called Un Flic, and although the big star Alain Delon, known from his appearance as a pilot/stickman in The Concorde… Airport ’79, plays the titular taciturn flatfoot, it’s the criminals who get more screen time! And Delon’s cop character, Edouard, is a pretty robotic and unpersonable fellow, driving around, forever receiving calls on his police radio, being handed the phone by his partner, and intoning the exact same little phrase every time! I guess the idea is that being a police detective is not the glamorous world the earlier films of Jean-Pierre Melville had led us to believe it might be! Ha ha!

Richard Crenna from First Blood and Summer Rental plays the main thief, Simon, and things kick off with a bank heist set in a stormy off-season beach city, and though the thieves get some of the boodle they sought, they don’t get it all, and not only that but one of their number catches a bullet! By garr! However, the purpose of this heist was merely to finance another heist, and on this point it is successful enough!

We spend time alternately with Edouard and with Simon, and occasionally with both of them, because it turns out that they’re pals! Not only that, but the share the same sweetie pie, a radiant blonde played by Catherine Deneuve, that classy hemogobbler from The Hunger! Then we get the picture’s showpiece, which is Simon’s second heist! Ha ha, he climbs from a miniature helicopter to a miniature train, changes from his boiler suit into a debonair housecoat, then bonks a drug courier about the head and takes his narcotic-filled suitcase before shinnying back up to the miniature helicopter! Ha ha, it’s a terrific sequence!

The whole picture is shot in the sort of steel-blue patina we may recall from Playtime, and indeed the bank building at the beginning looks like a leftover set from that Tati classic! The picture is consistently engaging, with well-managed suspense and drama scenes, all leading up to the sort of ending popular in French crime pictures since Breathless, or for that matter since Pépé Le Moko! It’s pretty thin gruel so far as characterizations go, however, and the sense of doomy inevitability it’s trying to foster never really takes hold! But it’s a fine crime feature, and, even if not up to Melville’s finest work, a decent capstone to his career! I give Un Flic three curly-cord carphones!
Posted by Burl at 11:58