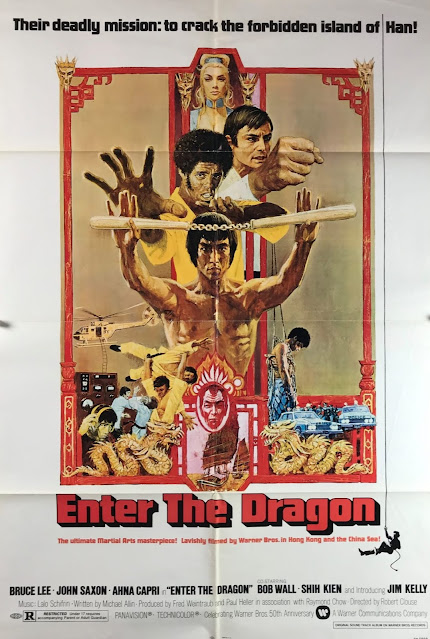 Kaa-chop, it’s Burl, with a little of the classic martial arts for you! Now, I’m not talking about Bruce Le, star of Infra-Man and Enter the Game of Death; nor Bruce Li, who toplined Exit the Dragon, Enter the Tiger and Blind Fist of Bruce; nor Bruce Lei from Enter the Deadly Dragon; nor Bruce K. L. Lea from Bruce Lee Fights Back From the Grave and Silent Assassins! No, today we have none other than the real-deal Bruce Lee in his final proper film appearance: that great favourite Enter the Dragon!

If you’re looking for a complex and unpredictable narrative, this is not the film for you! The story is simplicity itself: a martial arts expert is recruited by a toffee-nosed Hong Kong Brit to take part in a fight competition held on the private island of suspected drugs lord Han! He’s especially game for this because Han’s men were responsible for the death of Bruce’s beloved sister! Other participants in the competition are charismatic soul brother Jim Kelly, and, of all people, John Saxon, the iron-nosed cop from, your choice, Black Christmas, Blood Beach, or A Nightmare on Elm Street! He’s not a cop here, just a playa who does kung fu!

All the James Bond-y things you’d expect, like the skulking around and the fighting with henchmen, and the murder of the most likeable character, come to pass, and there are regular infusions of mano-a-mano, some of which are over unexpectedly quickly, others which are quite epic, and one of which doesn’t happen at all: on the boat trip to the island, where the old Purple Noon trick is pulled on an objectionable Kiwi! At one point we get to witness Bruce's impressive skill at twirling the nun-chuck-as, and that's a sight to behold! Ultimate vengeance comes in the hall of mirrors as Bruce battles the savage wolf claws of Han! Ha ha!

Of course director Robert Clouse tried this same story again a dozen years later in Gymkata, and the results were not stellar! In fact the results were downright Gymkata! But with Enter the Dragon, of course, he has such advantages as Bruce Lee, a good supporting cast, a decent budget, and again, Bruce Lee! And that means a world of difference, because Lee had style to burn and skills all day long, ha ha! What a genuinely terrible  shame that a cerebral edema got such a vital man at such a young age!

I guess there’s not a lot more to say about this iconic picture! The Lalo Schifrin score is not one of his more memorable, but it serves the purpose! Clouse’s direction is similarly nothing special, but he keeps it all moving and lets the fighters do their thing! It’s nice to see such familiar faces as Bolo Yeung, Sammo Hung and even, they say, Jackie Chan operating in the margins of this important movie! (Although Bolo is featured fairly heavily, and how could it be otherwise with a guy like Bolo!) Taking everything into perfect consideration, the proper thing to do is to give Enter the Dragon two and a half souvenir handbones!
Posted by Burl at 10:21