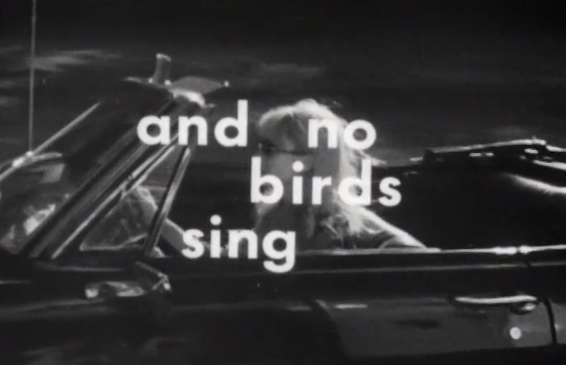 Ha ha and hello, it’s Burl here! Today I’ve got a real obscurity for you: a short feature, or maybe a long short, ha ha, made by a university student’s union in the late 60s, shot in glorious black and white, minimalist in plot and only just over forty minutes long, but with plenty of groovy music, entitled And No Birds Sing!

It’s set in and around a university campus in the 60s, so that’s a pretty marvelous starting point! Our main character is a soporific nonentity called Joey, played as though mostly asleep by one-and-done actor Ian Malcolm! (Ha ha, no, he’s not the leather jacket professor played by Jeff Goldblum in Jurassic Park!) Joey, bereft of intellectual ambition, of vigor, or of character traits of any kind, is fixated on a fellow student named Virginia, played by Marsha Sadoway! He’s already got a girlfriend though, a perfectly sweet young lady, and though in his brief bit of narration at the beginning of the movie Joey allows that this puts him “in kind of a bind,” he seems to entirely lack any means to deal with it!

Joey’s pal is Alvin, a straight-talking glasses nerd played by Michael Posner in the picture’s best performance! We see these fellows in their classes (one of them an English class taught by Victor Cowie who was in Careful, and who also wrote and directed this picture, in which he discusses the Keats ballad “La Belle Dame sans Merci, containing the line “And no birds sing”) and discover that Joey seems to have no interest in anything but the girl with which he is obsessed, while Alvin is more engaged in the subject at hand!

Joey is just as dissociated from his tolerant-to-a-fault girlfriend, and it only takes a scene or two of the couple conversing to convince you that she should really find someone a little more fun to be with! Ha ha, the guy’s a real drip, and besides, hey lady, Alvin's right there! Anyway, after some scenes on the campus, a bit of outasight nightclub stuff, and shots of Virginia running through the forest looking alternately coy and fearful (which I take to be Joey’s daydreams of his crush acting the dryad), we finally get to the big party scene, held in a house that looked somewhat familiar to me! The people certainly looked familiar - ha ha, I’ve seen photos of my parents attending just such parties! 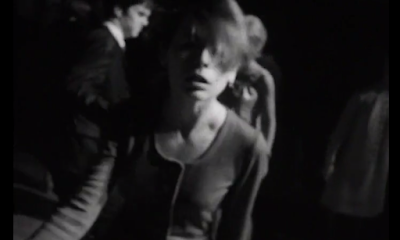 This is a good, Canadian, Trudeau-the-Elder-era party, with plenty of stubby beer bottles and boxes of Old Dutch chips, and hippies lurking in the corners! Here, Joey manages to ditch his girlfriend, corner Virginia, and profess his devotion; but he gets a bit creepy, and worse than that boring, and ends up passed out on the coat bed! Ha ha! So much for his romantic quest!

The picture has exactly the feel of a movie made by a students’ union, ha ha! I didn’t much care for Joey, who I suppose was meant to be a Ben Braddock of the North, but I did like a couple of his friends and the places he went! Miscommunication seems to be the movie’s abiding theme, as characters frequently misinterpret, don’t understand, or simply don’t seem to hear what the others are saying to them, and again, Joey is the standard bearer for this! In the end it’s a classic example of a movie that follows closely a character who never comes close to earning such devotional scrutiny! I give And No Birds Sing two peace buttons!