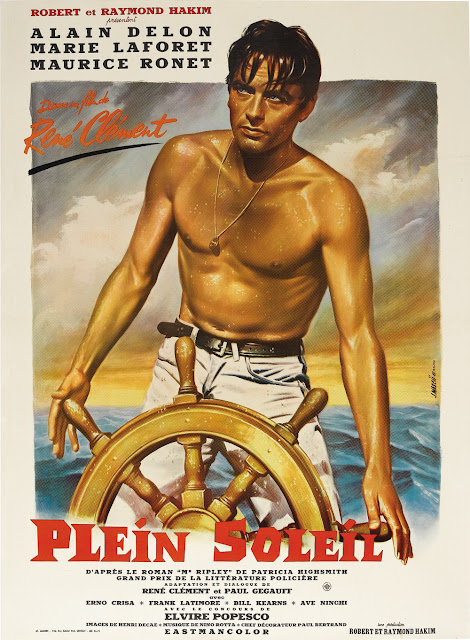 Allons-y sur le bateau, c’est Burl! Yes, it’s a French picture today, the first cinematic adaptation of Patricia Highsmith’s debut Ripley novel, The Talented Mr. Ripley! The movie was retitled Plain Soleil, but is known to the English speaking world by the nonsensical but evocative title Purple Noon! So it’s a story virtually everyone is familiar with, from seeing The American Friend or The Talented Mr. Ripley; but for Purple Noon , the initial kick at the can, they really Frenched it up! And that’s no bad thing!

Tom Ripley, played by Alain Delon from Un Flic, is the poor hanger-on who has apparently been asked by the father of a rich playboy called Philippe Greenleaf, essayed by Maurice Ronet from Elevator to the Gallows, to bring his wayward Philippe to San Francisco! Whether this is actually the case is questionable: Ripley, we discover, is the sort of fellow who’ll say whatever is most convenient to him whether it’s true or not; and at one point Philippe claims to hardly know him!

By the time the characters are sailing around on a beautiful yacht, it’s pretty clear that Ripley’s default mode is covetousness, and that what he covets are Philippe’s lifestyle and his ladyfriend Marge, impressively played by first-time actor Marie Laforêt! Philippe treats her abominably; in one harrowing scene, outraged that she’s not giving all of her attention exclusively to him, Philippe tosses the manuscript she’s working on, about the fresco painter Fra Angelico, overboard and into the sea! Perhaps it’s at that moment that Ripley decides he must be killed; certainly it was when I decided it, ha ha!

But Tom doesn’t kill Philippe because he thinks there’s anything wrong with his behavior - indeed, he himself wants to behave just like Philippe! Billy Kearns from Playtime is another playboy, Freddy Miles, an American friend of Philippe’s who dislikes Ripley and becomes suspicious of him, and so must be disposed of by a violent bonking! And when this is done, Ripley, by clever manipulation of poor Marge, is ready to repattern his life as Philippe’s, and the only thing standing in his way is the filmmakers’ determination to end their movie differently than Highsmith ended her book! Ha ha!

For a movie that contains exactly zero characters one is disposed to like, and traded a perfectly sensible ending for one redolent of Production Code morals, this is an awfully nifty work of picturemaking! Ha ha, Delon’s performance nails the character exactly: a good-looking guy most people dislike on sight, who can play along with the fun times and is quick and clever enough to extemporize his way out of almost any situation, but who still exudes an air of dull desperation! The rest of the performances are excellent as well, and the Mediterranean location shooting from master lens-smith Henri Dëcae is fabulous, like a bright colour version of the same year’s L’ Avventura! René Clement, the director, pulls off the required tone without seeming to try anything specific at all, and that counts as an achievement in my book! It’s got a rich texture and a quiverful of subtleties, and beautiful people to look at and loathe! It’s a terrific picture and I give Purple Noon three dangling hands!