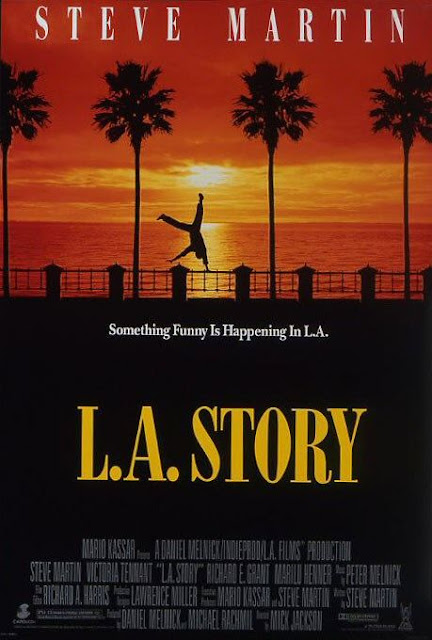 A jolly Left Coast hello to you all, it’s Burl! Ha ha, I’m here to review a movie I remember seeing when it came out! I saw it on a date with a girl named Catherine, and I think it was the only movie date we went on! It’s a romantic movie, though, and as I recall it was a reasonably romantic date as well! But the particulars have been lost to time and to the hazy vicissitudes of memory, and so all I really have left of that date is the movie we went to see: L.A. Story!

Steve Martin from ¡Three Amigos! and Planes, Trains & Automobiles is the star of the picture, ha ha, and he also wrote it! He plays Harris Telemacher, the wackiest weatherman in Southern California, and wouldn’t you know it, he’s vaguely dissatisfied with his life! Fortunately the magic of Los Angeles is such that its freeway information signs are sentient, benevolent entities who live only to help well-heeled but vaguely dissatisfied white guys with their minor problems!

One such signpost stops him on the side of the road one night and informs the befuddled weatherman that it wants to help, and that he should look out for the weather! It also delivers unto him a riddle, ha ha! From here the movie becomes a combo plate of absurdist satire and yearning romance regularly infused with Enya tunes and the incessant twirling of Sarah Jessica Parker, who is even more footloose here than she was in Footloose!

The principal object of Telemacher’s ardor is Victoria Tennant, who co-starred with Martin in All of Me, and, I think, married him! She plays a flibbertigibbet journalist in town to do a story on the city and its people! There’s a romantic quillici, or at least a perceived one, between her, Telemacher, the flax-brained earth child played by Parker, and a good-natured Brit essayed by Richard E. Grant from Withnail and I! Marilu Henner from Johnny Dangerously is in there too I guess, as Telemacher’s ladyfriend who turns out to be having an affair with his agent, played by Kevin Pollack from Grumpy Old Men! “Ha ha, I thought they were only supposed to take ten percent!” Telemacher grouses!

The name “Harris Telemacher,” which is a little bit weird and a bit stuffy too, gives you an idea of the comedic tone of the movie: it has one foot in the goofology of, say, The Man With Two Brains, and the other in the more classical romanticism of Roxanne! There’s a general undergraduate Shakespeareishness to the whole enterprise, but the takeaway is unclear! Perhaps we're meant to realize that, within our own sphere of existence, each of us is our own Prospero! At any rate, the literary pretensions offer the opportunity for a cameo from Rick Moranis of Ghostbusters fame, who plays the gravedigger from Hamlet! (Remember that in Strange Brew, Moranis played a hoser version of either Rosencrantz or Guildenstern, so he comes by the experience honestly!) Further cameos come from Patrick Stewart, best known from Lifeforce; Chevy Chase of Fletch fame; and Woody Harrelson from Wildcats!

The movie comes from the director of Volcano, which is another L.A. movie! Ha ha, the two films might make a nice, highly specific little double feature - both of them, after all, are in their own way love letters to the City of Angels, and each of them contains an earthquake in the first reel, too! L.A. Story is a wisp of a puff of a thing, but it’s got plenty of amusing moments and good-natured performances, and if its satire doesn’t really leave any marks, that’s because its target is covered in Teflon! Ha ha! I give L.A. Story two and a half high colonics!

Email ThisBlogThis!Share to TwitterShare to FacebookShare to Pinterest
Labels: 1990s, comedy, fantasy, saw it on a date, saw it on the big screen