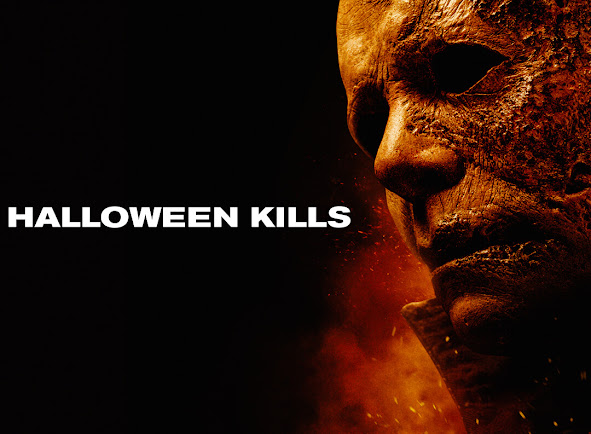 Boo to you and boo to you too, it’s Burl, here with some slasher sequel action! Ha ha, yes, it’s true - after my experience with Malignant, I returned to the cinema for more horror! This time I was the only guy in there, thanks to my clever policy of seeing matinees if possible! As a fellow who more or less enjoys the Halloween series, it was a real treat to see this pumpkin-flavoured madness on the big screen, though I wished there was no pandemic and I could comfortably watch it in a crowd!

Of course we know from my recent review of the 2018 Halloween that this cycle of films makes a point of ignoring all the other Halloween pictures except the 1978 Carpenter original! But, like the 1981 Halloween II, this newest picture, Halloween Kills, takes up right at the moment its predecessor ends, though with the addition of an extended flashback to that terrible night in late October of 1978! Eventually we get another flashback which rewrites the end of the original film, or at least rewrites the beginning of (and obviates the entirety of) its sequel!

Jamie Lee Curtis, famed from her appearances in Prom Night and Trading Places, returns in the role of Laurie Strode, former donkey girlscout, now vengeance granny! But she’s too injured from her encounter with Michael to do much beyond lie in her hospital bed and soliloquize about the terror and the evil, and occasionally to reminisce with her roommate, Will Patton, who got grievously injured in the previous picture by a rogue Turk, but somehow survived!

And then there are the minor characters who met Michael that first time he came home! Ha ha, it’s quite a gallery! Anthony Michael Hall from Out of Bounds plays Tommy Doyle, the kid being babysat by Laurie in the old picture, grown into a big solid man whose hobbies include bird whistling and mob inciting, and another fellow plays Lonnie, the kid who was kind of a bully in grade school and gets scared away from the Myers house by an uncharacteristically playful Dr. Loomis, but in this picture he seems to be the object of bullying, which I suppose is part of the film’s “what goes around comes around” theme!

But many of the original actors return from the Carpenter picture: the original Lindsey, played then and now by Kyle Richards from The Car; the psychiatric nurse played by Nancy Stephens, whose character was killed in Halloween H2O, but of course that didn’t happen as far as this movie is concerned; and Charles Cyphers from Truck Turner and The Fog, whose Sheriff Brackett is no longer the police chief but has become a very grampy-looking hospital security guard! Many of these people either become involved in or else try to stop a homicidal mob on the trail of Michael, or else become involved in it and then try to stop it! The mob sets great store in their catch phrase, “Evil Dies Tonight,” but frankly their follow-through is lousy!

The mob provides plenty of victims, but other victims are just minding their own business! People in their homes are poked, bonked, neckbroke, and gouged! Of them all, I’d most like to hang out with Big John and Little John, the affectionate couple who have moved into Michael’s old house, where they smoke pot and watch John Cassavetes movies - and Little John is played by none other than the fellow who directed Anthony Michael Hall as Walter Paisley in that A Bucket of Blood remake! Ha ha!

They really tossed a lot of mackerels in the pot for this one! There are some gross murders with plenty of marinara; an effective score from Carpenter, his son, and a buddy; a confused ideology; a sad scene involving another escaped patient who is mistaken for Michael by the mob despite the two-foot height difference in the men; not a whole lot in the way of affrights or basic common sense; and lots of references to the other Halloween pictures, even to Halloween III! (Ha ha, I think the movie’s reality should have included the events of both Part I and Part III, with some somber references in the dialogue to the great mask massacre of ’82!)

And yet for all the silly behavior and bloodthirstiness, Halloween Kills is what David Lynch refers to as a “neighbourhood film!” I think the fact that Haddonfield is supposed to be a small town yet runs on for endless streets is a sort of tip-off to this picture’s alternative universe: as though it exists in a Tardis and everything is magnified and under which magnification a simple local madman may be catapulted to mythical status and motivate half the town into forming a violence gang, and the stairwells of the Haddonfield hospital seem to be twenty stories high! From almost any aspect - rational, narrative, geographical - it makes little to no sense, but nevertheless I give Halloween Kills two smoking pumpkins!